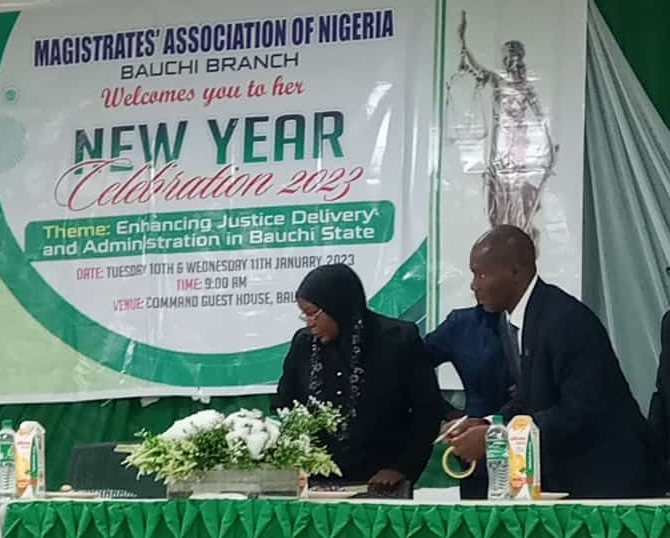 Bauchi State Chief Judge, Justice Rabi Talatu Umar has sounded a note of warning to deal with any Judge or judicial officer found wanting in the discharge of official functions.

She also warned that nobody would be spared if found guilty of disrupting the sanity of the judicial system in the state.

The Chief Judge was speaking during the 2023 New Year celebration by the Magistrates Association of Nigeria (MNA), Bauchi State branch held in Bauchi.

The celebration had as Theme: ‘Enhancing Justice Delivery and Administration in Bauchi State’ .

Rabi Talatu Umar who was Chairman of the occasion, was represented by a Judge of the State High Court, Justice Mu’azu A. Abubakar.

The Chief Judge who doubles as Chairman, Judicial Service Commission (JSC) commended the leadership of Magistrates’ Association of Nigeria in the state for their hardworking, commitment and dedication to the effective delivery of justice in the state.

She however urged them to adhere strictly to the provisions of the dispensation of cases before stressing that the Administration of Criminal Justice law should always be applied.

Speaking earlier, Chairman of the Magistrates Association of Nigeria (MAN), Bauchi state chapter, Abdulmumuni Adamu Esq, urged his members to be up and doing and not to relent in the efforts of discharging their judicial functions by pretending that all is well.

Abdulmumini Adamu Esquire said that the year 2023 was unique considering the general elections that was coming with enormous challenges such as political betrayal, rivalry, thuggery, gangsterism and the proliferation of crimes which demand judicial intervention.

The MAN chairman, enjoined Magistrates in the state to exercise their discretionary powers judiciously and judicially in the overall interest of justice as against any political interests.

Related Topics:Bauchi chief
Up Next