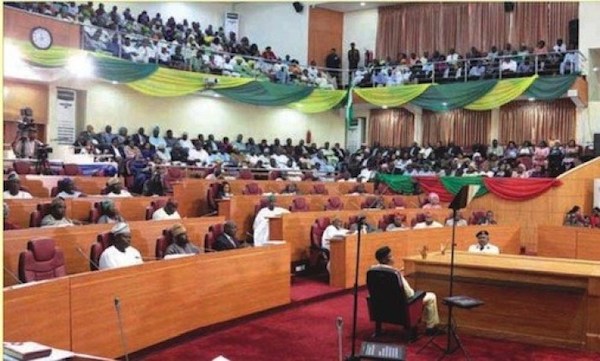 Factional Speaker of the Bauchi state House of Assembly, Kawuwa Shehu Damina and his Deputy, Tukur Ibrahim have been barred from parading themselves as Speaker and Deputy Speaker respectively.

This is as a Bauchi court on Friday granted an interim conjunction following an application filed by Abubakar Suleiman and 12 other lawmakers.

The judge in his ruling said “Having listened to the learned Counsel to the Plaintiffs/Applicants, Ben Ogbuchi, ESQ, Mukhtar A.Usman ESQ, O.P Egbe-Okpenge, ESQ. move the Court in terms of their motion Ex-parte dated and filed on 21/06/2019.

“I hereby ordered that an order of interim injunction be and is hereby made, restraining the 3rd and 4th Respondents/Defendants from parading themselves out and / or parading themselves, purporting to act in whatever manner as the Speaker and Deputy Speaker of the Bauchi State House of Assembly respectively pending the determination of the motion on notice”

He later adjourned the matter to July 2nd, 2019 for motion on notice.

Kawuwa Shehu Damina and Abubakar Suleiman had emerged Speakers from separate inauguration held by two factions of members of the Bauchi State House of Assembly on Thursday, June 20th, 2019.

Some 11 members had elected Abubakar Suleiman as Speaker and Danlami Ahmed Kawule of the PDP as his Deputy.

On the other hand, the other 20 APC lawmakers at a separate inauguration at the premises of the Bauchi State House of Assembly, elected Kawuwa Shehu Damina as Speaker and Tukur Ahmed as his Deputy.

Osinbajo leaves for US, to meet Mike Pence

IPOB, other Igbo groups vow to resist plans to set up Fulani vigilante body in S’East