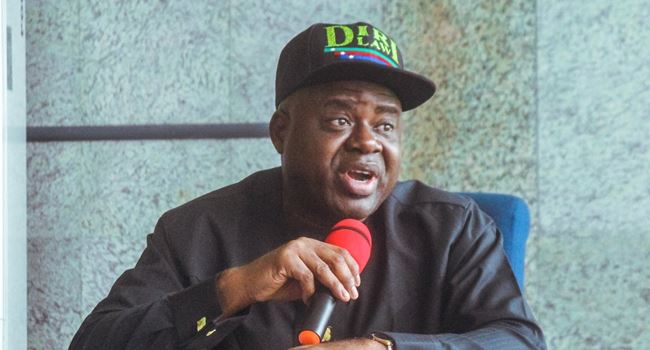 The governorship candidate of Peoples Democratic Party (PDP) in Bayelsa State, Senator Douye Diri has claimed that the All Progressives Congress (APC) was not ready for a peaceful election.

He said the opposition party in the state was banking on violence and the use of “federal might, military and police” to write the results of the election.

Diri made this allegation in Yenagoa on Tuesday, when he received a delegation of the British High Commission and the US Embassy.

He expressed optimism that the PDP would win the November 16 election in the state and would not need to engage in violence to do that.

“We don’t want violence. Election is not war, you don’t need guns. We are ready for a peaceful, free and fair election, unlike our main opponent. APC is not ready for election. They are banking on violence, they want to use federal might, military and police. They are planning to write the results.

“We are calling on the Independent National Electoral Commission (INEC) and the security agents to remain neutral in the election. INEC must help Nigerian democracy to grow. The Osun and Kano elections are still fresh in our memory. PDP clearly won those elections, but for the inconclusiveness introduced by INEC to give victory to the APC.

“Bayelsa is PDP. We have 19 members out of 24 in the House of Assembly. We have 105 councillors, eight elected local government chairmen. Even the Senate seat APC won in the last election is compromised. We all know what they did, including the two seats in the House of Representatives in Brass/Nembe and Southern Ijaw. That is not democracy,” Diri said.

He then urged the two international bodies to beam their searchlight on the conduct of the election.

According to the US Consul-General, Claire Pierangelo and leader of the British High Commission team, Sarabjit Singh, they came to the state to advocate a peaceful election by meeting the leading candidates.