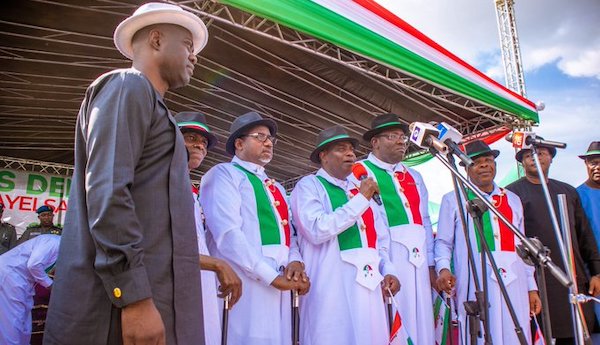 A staff of a radio station was shot dead on Wednesday in Bayelsa State following exchange of gunfire between some supporters of the Peoples Democratic Party (PDP) and the All Progressives Congress (APC) during a governorship rally organised by the ruling party in the state.

Simon Onu, a staff of the Bayelsa State-owned radio broadcasting corporation, Radio Bayelsa and driver of an outside broadcasting van was hit by a stray bullet and died on the spot while trying to maneuver his vehicle from the venue of the rally in Ogbolomabiri community in Nembe LGA.

The PDP governorship campaign which the state governor, Seriake Dickson and the candidate of the party, Senator Douye Diri were to attend, was disrupted by massive shootouts and party faithfuls chased out of the area.

Some ournalists who attended the event were reportedly held hostage in the Nembe forest for several hours until the military came to their rescue.

Fidelis Soriwei, the Chief Press Secretary (CPS) to Governor Dickson, who confirmed the death of Onu blamed the incident on the activities of APC thugs

Soriwei in a Facebook post said thugs led by some APC leaders fired at members of the PDP in a bid to prevent the gubernatorial rally of the party.

He said: “The attackers also opened fire at the Protocol bus of the Bayelsa State Government House at a junction between Bassambiri and Ogbolomabiri.

“One of the PDP members died of gunshot injuries while several others sustained serious injuries and have been rushed to the hospital.

“Meanwhile, Bayelsa State Governor, Henry Seriake Dickson, has insisted that the rally must go on. The Governor who condemned the violence urged the security agencies to take full control of the situation for the PDP rally to hold peacefully”.

But the Director-General, TimireSylva Support Organisation, Wilfred Ogbotobo, said that the PDP members were the aggressors adding that the party leaders invaded the community with thugs to chase away members of the APC.

Ogbotobo said some APC members were injured in the attack wondering the reason for the campaign in Nembe when the party rounded off their rallies with a grand finale held in Yenagoa.

He said: “The PDP leaders did not go to Nembe for any campaign. It was a premeditated plan to chase out APC members and supporters from the community, having realized their rejection and imminent failure at the poll.

“As soon as they arrived the community they started chanting war songs, destroying APC banners and billboards and taunted APC members in their support bases.

They came with weapon wielding mercenaries from other places in Police and other military uniforms who started harassing APC members without provocation.

“Their intentions were to precipitate crisis and render the whole Nembe unsafe for the election. The public should disregard their habitual lies and infantile propaganda. Nembe people have rejected Seriake Dickson and his restoration agenda.

“They are known trouble mongers. They are out to deceive their master to get quick cash. They know quite well that Nembe is too big a place that they can easily conquer for their failed Dickson”.