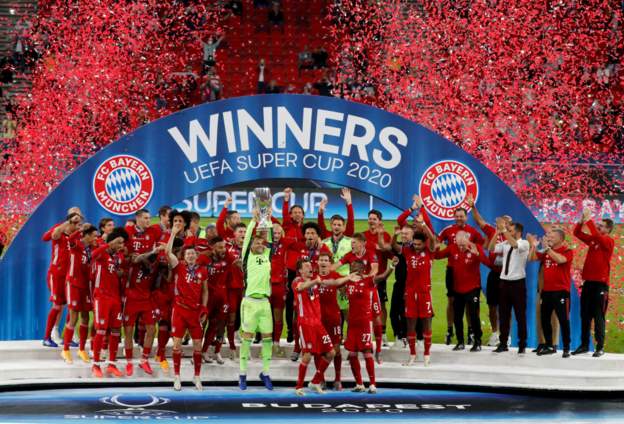 A durable and resilient Sevilla held the Germans to a 1-1 draw after 90-minutes, forcing the game into extra time in the presence of about 20,000 fans.

Substitute Javi Martinez netted the winner with a 104th-minute header.

The Spanish side had gotten into the lead from the penalty spot on 13 minutes by Lucas Ocampos, before Bayern equalised before the break when Leon Goretzka scored from Robert Lewandowski’s superb touch.

The game, which was the first major European match to allow fans since the Cornonavirus pandemic forced the game into lockdown, was a hard-fought encounter.

Bayern won every game in winning the Champions League last season. They have now won 22 games on the bounce in all competitions and are unbeaten in 32 games.

The team, considered favourites of this season’s Champions League, won their first UEFA Super Cup in 2013. Thursday’s triumph is their second in history.

Sevilla were the 1996 UEFA Super Cup winners and they are six-time Europa League champions.