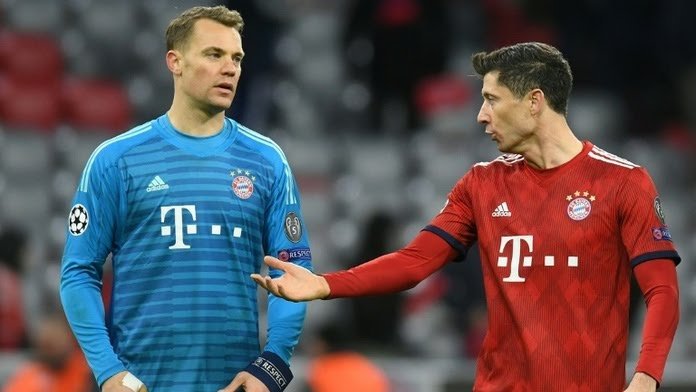 Karl-Heinz Rummenigge, CEO of Bayern Munich, has heaped praises on club forward, Robert Lewandowski ahead of the 2020 FIFA ‘The Best’ Awards.

Rummenigge, who praised the forward during an interview with bundesliga.com, also praised goalkeeper, Manuel Neuer, tagging him the best goalkeeper of all time.

The CEO’s comments are coming few weeks to the gala of The Best awards by world football governing body, FIFA, which is billed to hold on December 17, 2020.

Following the cancellation of the Ballon d’Or due to the effect of the Coronavirus Pandemic on football across the globe, it was actually unexpected that The Best Awards would hold.

But Rummenigge, who has consistently pushed that Bayern’s Lewandowski deserved an individual title this season, said it was good that the award would hold.

“Firstly, I think it’s good that FIFA are continuing with the vote this year. It wasn’t clear whether it would happen,” said Rummenigge.

Read Also: Lewandowski, others up for titles as FIFA announces shortlists for Best Awards

“I’m happy that FIFA have brought it (The Best) back, I hope that Robert wins, he’s had an amazing year, I think Robert Lewandowski is in the form of his life, despite the fact he’s 32 now but it’s not a foregone conclusion.

“I would like him to win, I hope he wins, he’ll have earned it but we’ll have to wait and see if he does win it at the end of the day.”

Lewandowski led his side to the Bundesliga title in August after football returned in Germany following a long suspension due to the pandemic, scoring 34 goals in just 31 appearances.

The Polish stiker also helped Bayern win the UEFA Champions League, scoring 15 goals and finishing as the top scorer in the competition.

Lewandowski has been shortlisted alongside 11 other players for the FIFA Men’s footballer of the year award.

Bayern goalie, Neuer has also been shortlisted in the race for the FIFA Men’s goalkeeper award, Rummenigge believes the 34-year-old deserves it.

“Manuel Neuer is like a red wine that matures each year. He anticipates pretty much every shot wherever it comes from and makes the save.

“I think Manuel Neuer has taken goalkeeping to a new level and we’re really happy that he’s lining up between the sticks for us,” he said.

Bayern are currently leading the Bundesliga and have also reached the round of 16 of the Champions League this season.