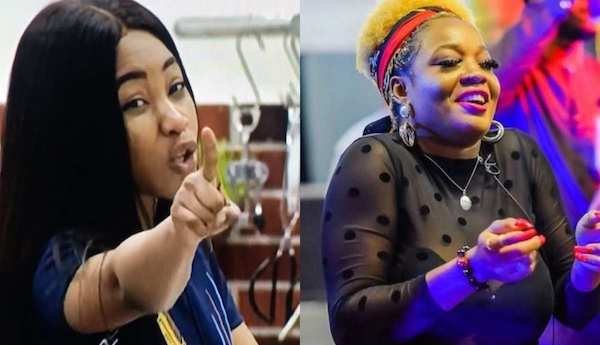 On Sunday evening, Big Brother gathered all the housemates and found Erica guilty of verbally assaulting Laycon, adding that her words to him graduated from mere insults to complete disrespect to her housemate and the whole Big Brother naija process.

Big Brother further stated that Erica was disqualified from the show for peeping through the glass to see the production team of the show which he said was “disrespect” to the organizers.

However, feisty housemate, Lucy Edet Essien (who had altercations with almost all the housemates), became the tenth contestant to be evicted from the well-followed reality TV show.

When asked by show host, Ebuka Obi-Uchendu why she chose not to hug any housemate on her way out of the house, Lucy said; “I knew I would start crying that’s why I didn’t hug any of the housemates on my way out.

On why she was regarded as a hot-head in the house Lucy said; “I was just really not comfortable seeing certain things that the housemates were doing; Erica was one of those who got to me. She changed after the first few weeks of the show and even became worse when she became Head of House.

Lucy becomes the tenth housemate to be evicted from the reality TV show after Tolani Baj, Wathoni, Brighto; Lilo, Ka3na, Tochi, Eric, Kaisha and Praise were booted out from the contest.