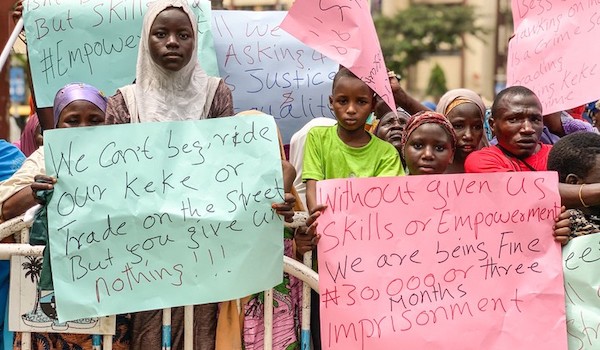 Beggars in Lagos State on Tuesday protested their harassment and arrest by officials of the state government.

The beggars, who stormed Governor Babajide Sanwo-Olu’s office in 10 buses and seven tricycles, barricaded the entrance to the State House of Assembly and demanded an audience with the governor.

They displayed placards with various inscriptions such as “Enough is enough, stop the persecution of people with disabilities,” “Save the waterfront, enforced conviction, we demand justice,” “If you don’t want to see us begging on the streets, give us skills and empowerment,” and “Seeing beggars all over our streets and roads is the failure of the system,” among others.

The spokesman of the group, Mohammed Zanna, told journalists that they were ill-treated and manhandled by government officials, leading to the death of some of their members.

He also revealed how some of them were arrested during a similar protest in 2017 and taken to a detention centre in Majidun, Ikorodu area of the state.

He said: “We cannot enter buses now because we cannot fight and struggle. We are seeking an audience with the governor. Let them come and tell us what they want to do with us. We need skills and empowerment. We are tired of sitting at home. We are demanding to be skilled.

“We do not want to beg on the streets. We have used our own ingenuity and resources to provide alternative livelihoods for ourselves that are more dignified, safer and productive to society. Yet, in the blink of an eye, this government is willing to destroy all we have built for ourselves and push us back into poverty and life without basic human dignity.”