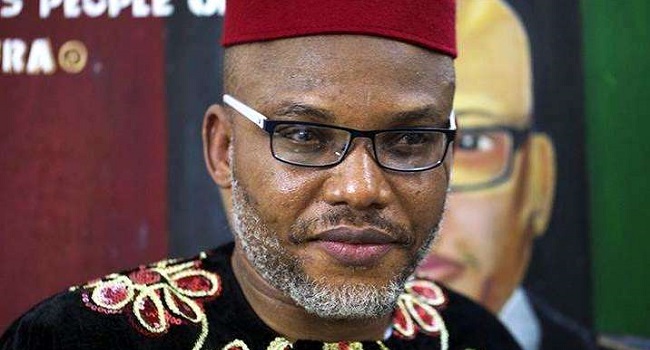 Leader of the Indigenous People of Biafra (IPOB), Nnamdi Kanu, has described the bench warrant issued against him by Justice Binta Nyako as a “mere academic exercise,” stating that it would be ignored by the international and diplomatic community.

Kanu during a broadcast insisted that Nigerian government could not by its antics incite the world against him.

Recall that the Federal High Court sitting in Abuja, had on March 28, in a ruling by trial Justice Binta Nyako, issued a bench warrant for arrest of the Kanu.

The court equally revoked the bail it earlier granted to the IPOB leader who is facing treasonable felony charge. Placing reliance on section 352(4) of the Administration of Criminal Justice Act, ACJA, 2015, the court, said it would go ahead to try Kanu in absentia.

READ ALSO: Justice Nyako granted me bail as part of ploy to assassinate me –Nnamdi Kanu

He added that the diplomatic community had since expressed its disapproval of what had befallen IPOB in Nigeria.

He said, “I remain eternally grateful to my sureties for standing by me all through my travails, trials and tribulations.

“It smacks of judicial persecution for Justice Binta Nyako handling my case to claim that my sureties had withdrawn their surety.

“Justice Binta Nyako’s bench warrant against me makes the judiciary complicit in the persecution of innocent people and IPOB since mid 2015.

“Where a case is for hearing of motion, the trial judge must hear the motion and adjourn for any other process. On no account should he hear a motion and hear the merits of the matter, not to talk about delivering judgment. He may consider doing that in the very rare circumstance of consent by parties.

“When a matter has been adjourned for a particular purpose, it is my view that the business of the court on the day the matter is adjourned is the purpose for which it was adjourned.

“It is expected that parties have come prepared for that purpose for which the matter was adjourned. If it is expedient to change the purpose, it cannot be done by the court suo motu (on its own) as the parties must agree.”

According to Kanu, another disturbing trend was the use of the media to prejudice public opinion against IPOB before and during trial, alleging that examples abound where media houses allowed themselves to be used as “willing agents” of persecution.

“In March last year, a continental human rights court restrained the Nigerian government from persecution of members of IPOB which the government is yet to obey.

“The arrest, detention and murder of IPOB family members is illegal, unconstitutional and in breach of the written laws of Nigeria.

“The fact that judges and supposed legal practitioners allow this travesty to continue is indicative of the level of ignorance that pervades the Nigerian judiciary,” he said.