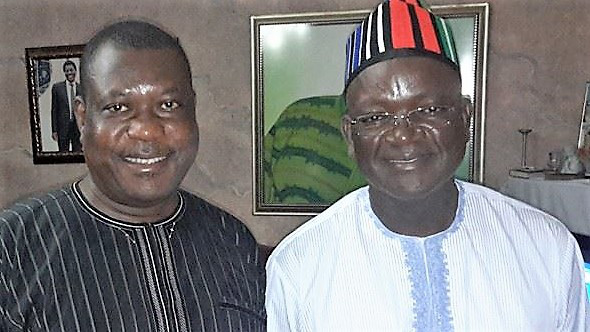 The political rivalry between the Senator representing Benue North-West Senatorial District, George Akume, and Governor Samuel Ortom. Monday took another turn, as they both hurled abusive words at each other.

While Akume, Ortom’s estranged benefactor, accused him of parading a fake PhD certificate, Ortom described Akume as a drunk whose words cannot be taken seriously.

Akume, who was reacting to an interview Governor Ortom granted, described Ortom as a non-performer, alleging that the governor was parading a fake doctoral degree.

The former Benue State governor also accused Ortom of running the Social Investment Programme like his family entity and needed to be voted out of power next year.

“He said I was a protocol officer while he was a local government chairman and that I served him, I never saw Ortom in the government house that period.

“He is saying I never won an election, but I won an election in 1999, he (Ortom) was in SDP; also in 2003 when I moved to ACN, I also won elections but the last election, Ortom lost in his local government. When I was building PDP, where was Ortom?” Akume asked.

Read also: 2019: I’m confident Lamido will step down for me— Atiku

The Senator, who also accused Ortom of always insulting President Muhammadu Buhari, challenged the governor to clear the backlog of salaries arrears owed workers and pensioners in the state, who, he said, were dying of hunger.

However, Ortom, in his reaction through his Adviser on Media and ICT, Tahav Agerzua, described Akume as a drunk who could not be taken seriously.

Insisting that a PhD was not a prerequisite for being a governor, Agerzua described Akume’s allegation as a diversionary tactic.

Ortom’s aide, who challenged Akume to give account of his stewardship in the Senate, also wondered when he became an assessment authority.

“Akume is not an accreditation authority and he cannot speak on that. In any case, that has no basis because PhD is not a prerequisite for governorship; so, it is a diversionary tactic. Let him give an account of his stewardship; he should stop assessing others, he is not an assessment authority.

“Moreover, everybody knows that he is a drunk; what he said stems out of his drunkenness; he is not someone to be taken seriously.”

Those who left APC are selfish and weak –Buhari