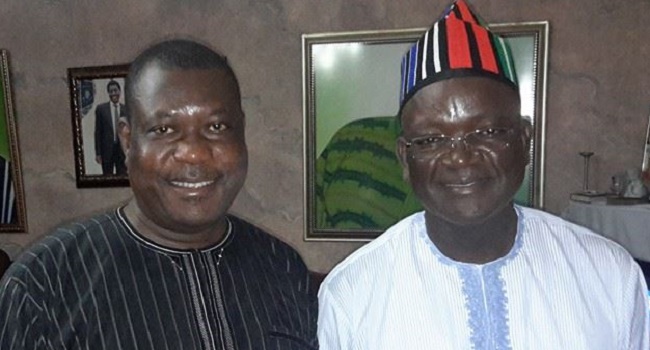 Governor Samuel Ortom of Benue State has raised the alarm over alleged plans by Senator George Akume and the All Progressives Congress ( APC ) to manipulate this weekend’s governorship and House of Assembly elections in the State.

The governor, citing reliable sources, alleged that part of the plans by the Senator was to mobilise the military to disrupt polls in locations believed to be strongholds of the Peoples Democratic Party ( PDP ).

He said, by this, voters would be scared away while the elections would be rigged to the advantage of the APC.

The governor made this claims in Makurdi on Sunday, via a statement issued by his Chief Press Secretary, Terver Akase.

He said, “Part of the plot, we understand, is to use the military to disrupt the elections, chase away voters in areas considered to be strongholds of the Peoples Democratic Party and allow hitch-free rigging by the APC.

“Senator Akume boasted during the meeting that there would be no voting in Benue State on March 9 as the APC rigging machinery would ensure that the party gets massive illegal votes allotted to it.

“He has repeatedly stated that the party will not allow free and fair elections in Benue State. Akume anchors his ‘confidence’ on what he and his supporters call “federal might”.

“They believe that the APC-controlled Federal Government will send security operatives to help them subvert the electoral process to favour their party.

“The embattled Senator said his party had concluded plans to carry out massive thumb printing of ballot papers and altering of results for APC candidates in Benue State and if PDP feels aggrieved, the party should go to court.”

The governor recalled how Akume allegedly instructed his supporters to destroy billboards and posters of the PDP within Makurdi which crippled vehicular activities in the State Capital.

Ortom who maintained that the people of the state would resist any attempt to rig the election, called for urgent preventive measures to guarantee free and fair conduct of the elections.

“Any attempt to use the military to manipulate the coming governorship and House of Assembly elections in favour of the APC in Benue State will be resisted,” he submitted.

Sanwo-Olu, Agbaje trade words over distribution of rice to civil servants ahead of guber polls