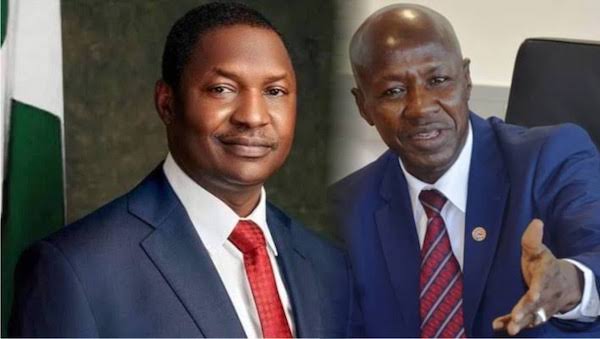 The embattled Acting Chairman of the Economic and Financial Crimes Commission (EFCC), Ibrahim Mustapha Magu, regained his freedom recently after more than a week of detention and interrogation in Abuja. Magu, it would be recalled, was picked up and handed over to the presidential panel investigating the alleged graft-related ‘offenses’ of the anti-corruption czar. Magu was given an ample opportunity to defend himself against the weighty allegations ranging from re-looting of the recovered loot to laundering of funds to ownership of choice properties abroad.

Magu shocked not a few observers of the Nigerian corruption drama, nay melodrama, when he said upon leaving for home that he would soon be discharged and acquitted of all the charges levelled against him describing them as well-orchestrated plot by traducers to rubbish him for exposing corruption in high places. And that he would soon bounce back to office to continue stepping on powerful toes!

Besides, he pointedly accused Attorney-General of the Federation and Justice Minister Abubakar Malami (himself embattled lately) of always interfering with the agency’s investigations and working with others to strip it of its statutory powers. In several cases under investigation, recovery and management of assets, Magu said, the office of the AGF had either interfered with the process or had been less cooperative and supportive.

Curiously as part of the ongoing probe over the EFCC activities under Magu, the Presidency last week suspended 12 directors of the agency including those investigating Malami for alleged corruption. That prompts the poser: Is AGF Malami above the law as the chief law officer? Why sacking those probing him?

As Nigerians at home and abroad were still digesting the full implication of Magugate Malamigate hit us from nowhere like a thunderbolt. The gist in town that had gone viral online was that Malami had been living opulently for quite sometime now while showing the face of a ‘saint’. He could have been more corrupt than Magu he had sought to ‘destroy’ professionally.

Penultimate week, one of his sons, Abdulazeez, took a wife, Khadija Danbatta. And to celebrate the marriage the high and mighty were invited to the Government House in Kano to witness the blissful marital event. From what we saw from the videos posted online it was indeed an elaborate ceremony fraught with pomp and pageantry.

In a series of text and photo stories in recent weeks, an online investigative news platform based in New York, US, had exclusively exposed how Malami, who was a little known lawyer before being appointed into the government of President Muhammadu Buhari in 2015, had maintained an opulent lifestyle despite displaying a saintly posture before the public.

According to to the online platform, Malami had allegedly been helping oil bunkerers to defraud the federal government.

As Malami’s son and his new bride were being ‘immersed’ in Naira and Dollars’ rain Malamigate trended online. The Justice Minister was alleged to have become another Aliko Dangote in terms of acquisition of wealth by hook or by crook.

The wedding extravaganza took the Malami family from Kano to Birnin Kebbi, capital of Kebbi state, where private jets and even a presidential plane were allegedly used to convey guests from far and near. Of course money, both local and foreign denominations, ‘spoke’ during the week-long show of power and influence.

When the anti-corruption czar is himself enmeshed in graft-related wild tales and the supposed supervising Minister of Justice demystified as stinkingly corrupt then the much-vaunted anti-corruption campaign is nothing but a farce aimed at deceiving some people but not all the people. What is baffling remains that the man, the President, who should show leadership by relieving both men of their jobs appears to be taking sides or dealing with a lesser ‘devil’.

Now the Minister, boxed to a tight corner, had petitioned the Inspector-General of Police, Mohammed Adamu, asking him to arrest Sowore still marooned unjustifiably in Abuja. And written to his lawyer to threaten SaharaReporters and its Publisher, the irrepressible Comrade Omoyele Sowore, with lawsuit if they failed to retract the stories and tender an apology within a stipulated time frame.

But the SR’s lawyer, Femi Falana (SAN), had warned the IGF that he must not do anything extra-legally. Since Malami and his lawyer had issued an intention to sue in the event of non-compliance with their demands, reasoned the Senior Advocate of Nigeria, it would amount to illegality for the police to heed the call of arrest. The court remains the best place to settle any issues arising from the ‘defamation’ or ‘libel’.

Between Magugate and Malamigate Nigerians have come to terms with the fact that corruption is destined to get worse with those charged with the responsibility of taming the monster becoming involved in its perpetuation. Corruption may ‘kill’ Nigeria before she ‘kills’ it! By the time all is said and done a good number of our people would come to the conclusion that we have been sold a dummy.

As things stand today the Buhari presidency has lost every damn claim of fighting corruption for whatever it is worth. From Magugate to Malamigate the ‘genie’ is finally out of the bottle and the integrity of Mr ‘Integrity’ appears to be in tatters. Like the national tragedy of the Boko Haram terrorism up north, defeated ‘technically’ or otherwise yet hitting harder, killing at will and taking prisoners, Buharism is fast unravelling.

Buhari reacts to Senate calls for sack of service chiefs