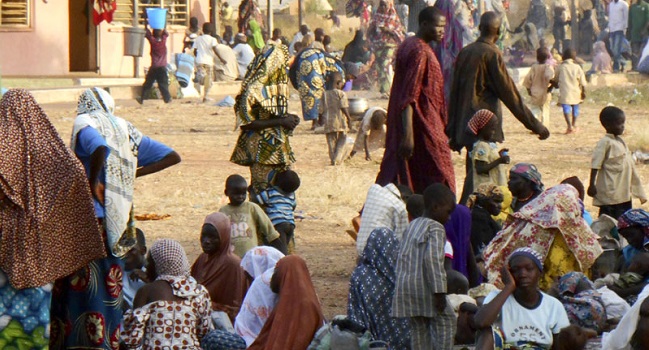 A 75-year-old blind Internally displaced person, Pa Jato Ndarfa, has cried out for help over a demand for N20 million ransom by the deadly Boko Haram insurgents to free his abducted daughter and niece.

Pa Ndarfa, who lives at the CAN Centre IDPs Camp in Maiduguri, told journalists that he has appealed to the insurgents to have mercy on him and release his daughter and niece as he could not to raise such amount of money being demanded.

According to him, his daughter, Lami Jato, 25, a graduate of Sir Kashim Ibrahim College of Education Maiduguri and his niece, Renita Bitrus were both abducted by some suspected Boko Haram terrorists two weeks ago at a farm in Tungushe, Magumeri Local Government area of Borno State alongside a tractor driver.

He further revealed that the abductors made contact through his niece’s phone and requested for N20 million before his daughter, niece and the tractor driver will be released to him.

Fighting back tears, the old man lamented where and how he could raise such a huge amount of money to pay the terrorists, calling on the insurgents to show mercy by releasing his children unconditionally.

He disclosed that his daughter Lami has remained the pillar of the family since 2014 when Boko Haram sacked their village, with his three wives still missing up to this moment.

According to him, Lami and his niece decided to engage in the farming venture so as to raise money for the sustenance of the family at the camp and his personal care as well.

He said: “It was two of them, my daughter, Lami Jato and my niece, Renita Bitrus who is married with two children that were abducted by the Boko Haram. It is 15 days now from the day they were abducted when they went for farming in Tungushe, along Maiduguri-Monguno road.

“Initially they were 7 in number at the farm that were abducted. Five men, my daughter and my niece, but they later released four of the men and held one of the men, the tractor driver and my two children.

“I am not fighting or quarrelling with the Boko Haram, they are my children. I am appealing to them to please have mercy on me and release my daughter, niece and the tractor driver.

“I am a poor blind old IDP living in a Nylon House in a camp. There is no means of getting money to feed talk more of getting N20 million to offer. Please my children pity me and release the women who are also your sisters.

“I am also appealing to our hardworking Governor, Professor Babagana Umara Zulum to come to my aid and intervene. I should not be allowed to die of frustration from what I am facing now. The situation is terrible for me here.”

Pa Ndarfa also appealed to State Emergency Management Agency (SEMA) and the National Emergency Management Agency (NEMA) to consider the IDPs at the CAN Centre camp for the distribution of food, stressing that, “it has been a long time we received food from SEMA and NEMA at this camp”, adding that he had been at the CAN Centre IDPs camp since 2014.