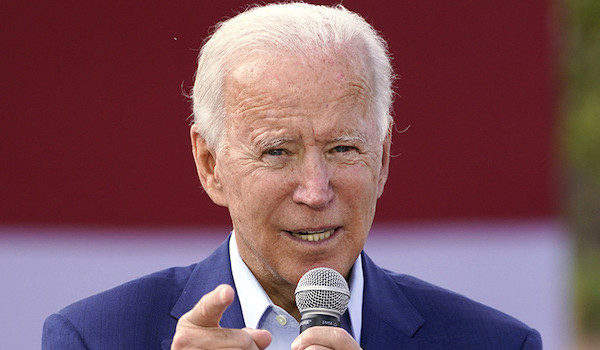 US president, Joe Biden, has warned that countries who refuse to revise their laws to accommodate Lesbian, Gay, Bisexual, Transgender, and Queer and Intersex (LGBTQI) people may be sanctioned.

Biden stated this in a presidential memorandum issued on Tuesday, February 9.

Sanctions against such nations may include financial punishment.

The bill contains penalties of up to 14 years in prison and bans gay marriage, same-sex “amorous relationships” and membership of gay rights groups.

“Persons who enter into a same-sex marriage contract or civil union commit an offence and are each liable on conviction to a term of 14 years in prison,” the bill says.

“Any person who registers, operates or participates in gay clubs, societies and organisations or directly or indirectly makes public show of same-sex amorous relationship in Nigeria commits an offence and shall each be liable on conviction to a term of 10 years in prison.”

But Biden’s memo reads, “All human beings should be treated with respect and dignity and should be able to live without fear no matter who they are or whom they love.

“The United States belongs at the forefront of this struggle – speaking out and standing strong for our most dearly held values.”

The memo directs US agencies working in foreign countries to work harder to combat the criminalisation by foreign governments of LGBTQ status or conduct, and directs the State Department to include anti-LGBTQ violence, discrimination and laws in its annual human rights report.

It calls for increased efforts to ensure that LGBTQ asylum seekers have equal access to protection, expanded training for US federal personnel, and potential increased use of priority referrals to expedite resettlement of vulnerable people.

It also instructs agencies to consider appropriate responses, including the full range of diplomatic tools, and potentially financial sanctions and visa restrictions, when foreign governments restrict the rights of LGBTQ people.

Whether the present administration in Nigeria will bow to the pressure from the US government and revisit the country’s anti-gay marriage law remains unclear at the moment.

The passage of the SSMPA was immediately followed by extensive media reports of high levels of violence, including mob attacks and extortion against LGBT people.

Read also: Biden says Trump should not get US Intel briefings due to ‘erratic conduct’

Human rights groups and United Nations officials expressed grave concern about the scope of the law, its vague provisions, and the severity of punishments.

The SSMPA contravenes basic tenets of the Nigerian Constitution, including respect for dignity and prohibition of torture.

Human rights treaties impose legal obligations on Nigeria to prohibit discrimination; ensure equal protection of the law; respect and protect rights to freedom of association, expression, privacy, and the highest attainable standard of health; prevent arbitrary arrests and torture or cruel, degrading, and inhuman treatment; and exercise due diligence in protecting persons, including LGBT individuals, from all forms of violence, whether perpetrated by state or non-state actors.

In November 2015, the African Commission on Human and Peoples’ Rights urged the Federal Government to review the SSMPA in order to prohibit violence and discrimination on the basis of sexual orientation and gender identity and ensure access to HIV prevention, treatment, and care services for LGBT individuals.

Whether the Buhari administration would take into cognisance the threat issued by the POTUS remains to be seen.