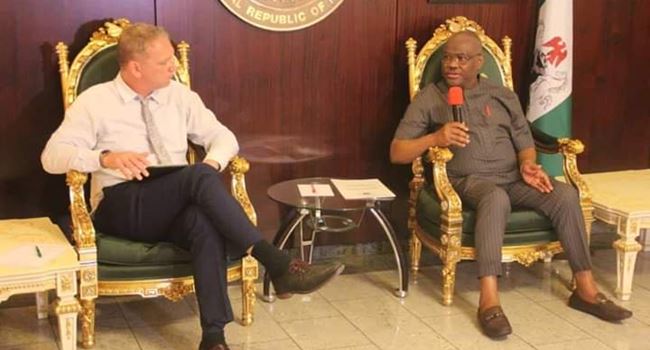 The governor of Rivers State, Nyesom Wike has heaped the blame of the myriad of security challenges experienced during the 2019 general elections on the doorstep of President Muhammadu Buhari.

According to Wike who revealed that much to a political team from the British High Commission that visited him on Tuesday at the Government House, Port Harcourt, the challenges that characterised the 2019 elections would have been averted, if President Muhammadu Buhari had assented to the amended Electoral Act.

Wike added that if Buhari had done the needful, the amended Electoral Act would have legitimised the card reader and strengthen the process of result collation across the country.

He said: “If the president had assented to the amended Electoral Act, we wouldn’t have had the kind of problem we had.

“That means there must be card reader in the electoral process. In that case, it makes it difficult for security agencies, who want to commit electoral fraud to succeed.”

Read also: ‘Our democracy must not be taken for granted,’ Tinubu speaks on significance of June 12

Wike also said with the card reader given legal teeth, it would play a key role in the results that would emerge and discourage violence.

“With the card reader, results that don’t tally with accredited figures in the device will not be accepted. Since the card reader is not in the law, it creates the loopholes for them to manipulate.

“They created the room where some security agencies tried to force returning officers to sign result sheets. Remember in Rivers State, the army took over the Independent National Electoral Commission (INEC) headquarters. The essence of that was to see that the returning officers were hijacked for fraudulent  purposes.

“But, if the card reader was legitimised in the Electoral Act, it would not have been possible, because the only acceptable result would be the one that tallies with the card reader. I have always said to Mr. President that in the interest of the country, let us do the right thing. Let us not politicise everything,” he said.