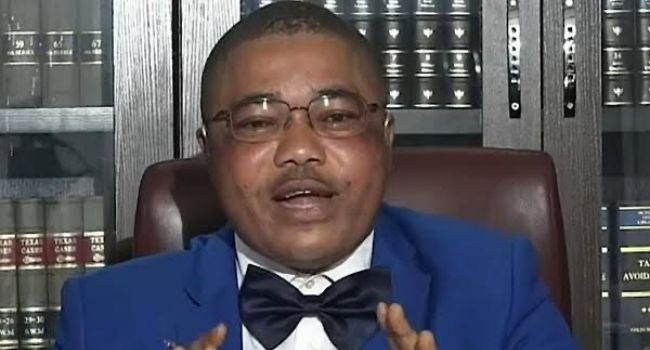 Barrister Ifeanyi Ejiofor, one of the lawyers to leader of the proscribed Indigenous People of Biafra (IPOB), Nnamdi Kanu has described the so-called unknown gunmen kidnapping and killing people in the South-East as “blood-sucking demons”.

He stated that these criminals are not members of IPOB nor identify with the group’s peaceful agitations for the actualisation of the Biafran Republic.

Ejiofor who was reacting to the recent decapitation of a lawmaker in Anambra State, Okey Okoye, said the incarcerated leader of IPOB, Nnamdi Kanu, is in shock over the blood letting by the gunmen who have taken over Igbo land, unleashing mayhem in all parts of the region.

Denouncing the gunmen, Ejiofor describing them as infiltrators who want to destroy the South-East region, urged the people to provide relevant information on how to track the criminal group operating in the region.

“Our land is under siege by blood-sucking demons. It is no longer in doubt that the insecurity rocking the South-East region has taken an entirely troubling dimension and cannot be allowed to continue,” Ejiofor said in a statement he issued on Sunday.

“On the 21st day of May 2022, I was inundated with the most unbelievable news making rounds, of the gruesome torture and subsequent beheading of one Mr Okechukwu Okoye and his co-traveller in Anambra State by their abductors.

“I was shattered and in disbelief! I kept making calls until late into the night to ascertain its authenticity, and very sadly, this has been confirmed as true.

“This is the latest in a spree of mindless and barbaric killings that are ongoing in the South-East in recent times.

“We, Igbos have been known for our hospitality, love and open-door policy to all and sundry. We take pride in being industrious by making something out of nothing wherever we find ourselves on this planet earth.

“May I assure you all at this point, that my indefatigable client, Onyendu Mazi Nnamdi Kanu, will be gravely shocked and saddened by this dastardly act too, having previously and severally mandated me in the past to condemn such barbaric act on his behalf.

“No doubt, our enemies have boldly infiltrated our land and now operating unchecked. Hence, there must be an immediate stop to these dastardly acts by these blood-sucking demons currently desecrating our land.”

“We, therefore, call on every well-meaning person living in the South-East, to join hands together to provide relevant information that would help to fish out these marauders, so that they are publicly dealt with in line with the dictates of the law.

“It is crystal clear that criminals are on a rampage. These monsters that kidnap for ransoms have no connection whatsoever with the freedom fighting movement.

“They are impostors and hirelings whose singular objective is to kill and destroy in a calculated attempt to demonize IPOB. They are not members of our noble IPOB,” Ejiofor said.