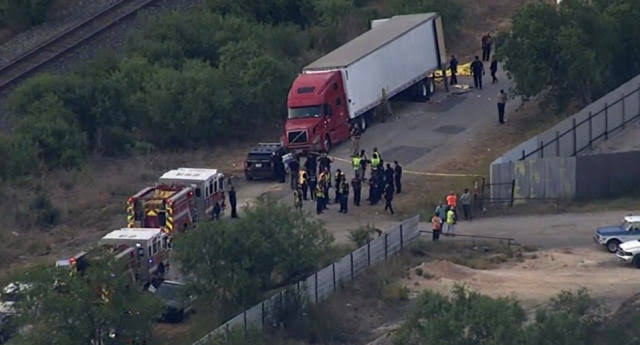 The United States Police says bodies of 46 dead migrants were discovered on Monday night inside a tractor-trailer in San Antonio, Texas, along the US-Mexico border in what is seen as one of the most deadly incidents of human smuggling.

A statement on Tuesday by the San Antonio Fire Department said it found “stacks of bodies” and no signs of water in the truck, which was found next to railroad tracks in a remote area on the city’s southern outskirts.

“Sixteen other people found inside the trailer were transported to hospitals for heat stroke and exhaustion, including four minors, but no children were among the dead,” the department said.

“The patients that we saw were hot to the touch, they were suffering from heat stroke, exhaustion,” San Antonio Fire Chief Charles Hood told a news conference.

“It was a refrigerated tractor-trailer but there was no visible working A/C unit on that rig.”

The San Antonio City Police Chief William McManus, who also addressed another press conference, said a person who works in a nearby building heard a cry for help and came out to investigate.

“The worker found the trailer doors partially opened and looked inside and found a number of dead bodies,’ McManus said, adding that the discovery was”the largest incident of its kind in the city.”

“Three people are in custody following the incident, though their involvement is not yet clear,” he said.

A spokesperson for US Immigration and Customs Enforcement (ICE) said that its Homeland Security Investigations division was investigating “an alleged human smuggling event” in coordination with local police.

Related Topics:MigrantsUS Mexican border
Up Next