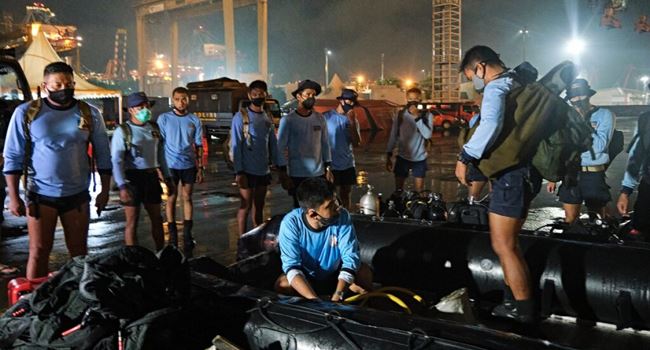 Rescue operatives in Indonesia have confirmed that they have found some body parts and wreckage of the ill-fated Boeing 737-500 aircraft which crashed into the Java Sea minutes after taking off from Indonesia’s capital Jakarta on Saturday.

The development was confirmed on Sunday by Indonesia’s military chief, Hadi Tjahjanto who said that rescuers pulled out pieces of clothing and scraps of metal from the waters where the Siriwijaya Air Flight 182 carrying 62 people is thought to have crashed.

According to Tjahjanto, divers recovered parts of the plane from around 23 metres (75 feet) below the water’s surface, after a military vessel “found the signal from” the aircraft on Sunday.

“We are sure that is the point where the plane crashed,” he said in the statement, expressing hope that weather conditions and “the view under the sea are still good so that we can continue the search” on Sunday afternoon.

The Boeing 737-500, en route to Pontianak in West Kalimantan, disappeared from radar screens after taking off just after 2.30 p.m. (0730 GMT) – 30 minutes after the scheduled time because of heavy rain.

Indonesian Transport Minister, Budi Karya, told a news conference on Saturday that 62 people were aboard the plane, including 12 crew members.

He said the plane crashed near Laki Island, some 20 kilometres (12 miles) from the airport.