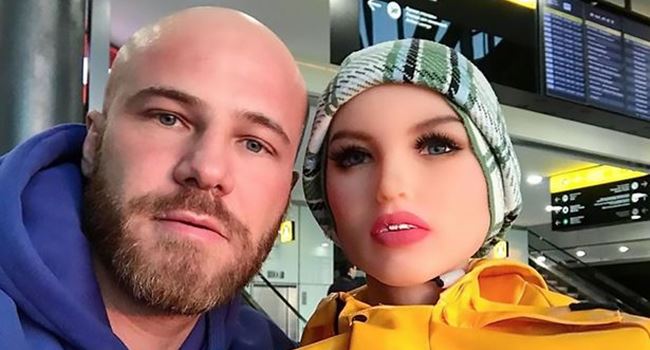 A body builder in Kazakhstan, Yuri Tolochko, has been thrown into tears and heartbreak after his sex-doll wife, Margo, tragically broke on Friday, December 25, and is hoping it can be repaired in time for their first romantic Christmas together as a married couple, UK Mirror reports.

Tolochko says he now faces a tense wait to see if all of Margo’s bits can be repaired back to good working order in time for them to have a great festive season.

Yuri who tied the knot with Margo at a ceremony attended by dozens of guests in November, said he met her at a nightclub, and the pair were due to get married in March this year before the coronavirus pandemic threw the world into turmoil.

The ceremony was delayed a second time after he was attacked during a transgender rally in the Kazakh city of Almaty on October 31. However, the pair had since settled into married life.

“In general, I began to be jealous of Margo. Many men would like to imagine the same. After the wedding, I decided to show her less to people, I forbade her from Instagram (I did this a long time ago). Maybe I’m being too selfish.

“But that’s the beauty of Margo, that I can do this to her and she won’t mind.”

In the meantime, Yuri has to wait for her to get repaired.

“She is broken. Now she is being repaired. She’s in another city. When she recovers, it will be a gift for both of us.”

Sharing footage of their wedding day on November 25, Yuri wrote on Instagram:

“It’s happened. To be continued.”

The previous month, he suffered a concussion and a broken nose after dressing as a woman for a transgender march in Kazahstan.

Describing the attack on him, Yuri said:

“A few months ago, I started using a female image for performances. I named this character Amanda. Through this image, I convey certain ideas in our society. So I was beaten.”

Why we celebrated Christmas with Christians in Nasarawa church –Muslims