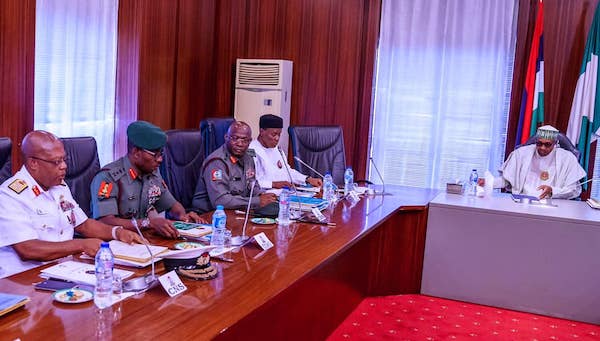 The Chief of Naval Staff, Admiral Ibok Ekwe Ibas Obok, said on Monday the Federal Government would begin a gradual withdrawal of military operations in the North-East part of the country where the Boko Haram insurgency had plagued for about a decade.

He said the withdrawal of troops would be carried out after an “assessment” to determine areas where peace had returned to enable civil authorities to assume full control of security.

Ibas, who briefed State House correspondents after a closed- door Security Council meeting presided over by President Muhammadu Buhari at the Presidential Villa, Abuja, said that the pullout would allow civil authority —police and civil defense —to assume their responsibility in the affected areas “since the terrorists have been degraded.”

He said the Council decided that in place of the military, the Nigeria Police Force, which has the primary responsibility of providing internal security, would assume its duties fully in such areas.

He said the Council agreed that the security agencies had performed well in 2019.

He said: “It is our wish to have the insurgency and terrorism ended in 2020 so that the military will focus on other areas.

“The Nigeria Security and Civil Defence Corps will support the police to provide internal security.

“Also, you will remember that additional 10,000 personnel were approved for the police recently for recruitment.”

Ibas said that the military would pull out gradually from the North East to face other emerging threats while the police would move in.

The navy chief declined to name the states where the military would withdraw its operations.