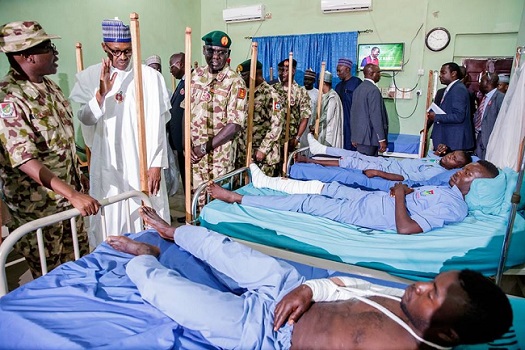 President Muhammadu Buhari has called on the Army not to be discouraged in the course of ensuring the end of insurgency in the North East.

Buhari who said the fight against Boko Haram is a must win war, encouraged Nigerian troops not to be distracted but remain focused to the “task of eliminating Boko Haram from the face of the earth.”

Buhari stated this when he addressed members of the military during the Chief of Army Staff (COAS) 2018 Annual Conference in Borno State on Wednesday.

He assured them that the Federal Government is committed to improving the military operations in the North-East, adding that his administration would spare no effort in supporting the military to achieve its task.

“We remain committed to ending the crisis in the North-east and making the entire area safe for all. I urge you all to keep up the good work.

“I know that you are doing your job to reverse this trend. I want to assure you that no effort will be spared in providing the necessary support you require to complete your task.”

Unconfirmed reports had claimed that over 100 Nigerian soldiers were massacred by Boko Haram during a recent attack on Metele military base in Borno.

Buhari, who spoke on the theme, “Optimising Efficiency for the Efficiency of the Army in Nigeria’s Democracy,” regretted the news of some soldiers paying the supreme price in the course of the operations against Islamic terrorists.

He commiserated with the families and relatives of the slain officers at the Metele attack about two weeks ago.

He added, “I have been visiting some of our injured troops in the hospitals and I also spoke to others in their bases to assure them of our continued support.

“It is a must-win war. I want to encourage our troops not to be distracted but remain focused to the task of eliminating Boko Haram from the face of the earth.

He also called on the military to be non-partisan before, during and after the 2019 general elections. According to him, the military should instead, deepen democratic structure by collaborating with other security agencies in ridding the nation of any violent act that could mar the electoral process.