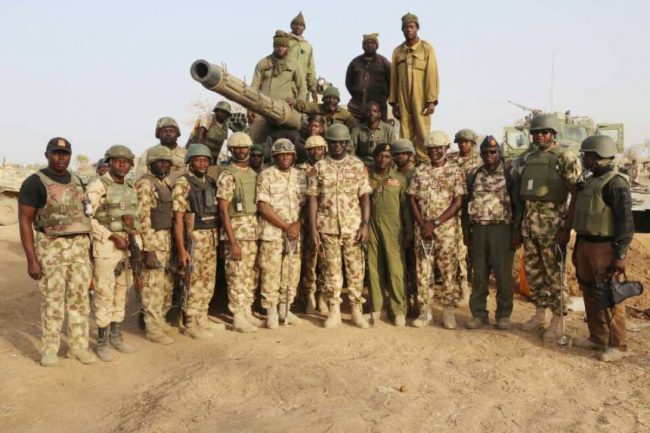 The Chief of Army Staff, Tukur Buratai, has declared completed, the operation to clear the Sambisa forest of “remnants” of Boko Haram insurgents.

Buratai commended the troops at Camp Zairo, the former command and control Centre of the terrorists in Sambisa forest.

The army chief was on an operational visit to the troops.

The troops had destroyed the camp in January in an operation tagged “Deep Punch II’’ and are now dominating the general area of the forest.

The military dislodged Shekau from the camp in December 2016 but the terrorists later re-grouped to launch scattered attacks.

Other locations visited by Buratai are Bita and Tukumbere, all settlements within the forest but almost deserted due to the insurgency.

“Let me say congratulations. But, we must move across to wherever this criminal– Shekau is and catch him red handed. I want you to get him.

“Mr President, Command-In-Chief of the Armed Forces says congratulations to all of you for recovering the Sambisa Forest.

“As far as we are concern, we have come to the end of this operation (clearing the forest of remnants of terrorists).

“What is remaining now is the Lake Chad waters only and we hope to do that (clear terrorists from it) also very soon.

“Meanwhile, you all know these criminals are still on the run; these guys are on the run, you must make sure that you get them wherever they are around this area.

“You must not allow them to escape. Every day, you must go on patrol, lay ambush for them and you go on raids.

“This is the time we have to consolidate and ensure that this place – Sambisa forest, is safe and never for these criminals to come back to it,’’ Mr. Buratai charged the troops.

The chief of army staff said he was in Sambisa and Camp Zairo to confirm the capture, destruction and domination by the gallant troops.

“I am glad that the troops have done the country proud and they have done Mr President proud by not only capturing the Camp Zairo within the forest but also consolidating on this success.

“It is a thing of pride and I want to say that we are proud of the Nigerian troops. We are proud of members of the armed forces, the Air Force, Navy, Police, DSS and indeed Civilian JTF, who have provided the needed service,’’ he said.

Buratai described Sambisa forest as strategic and assured that the military would secure it against terrorists.

“We are going to transform this place, apart from making it a training area.

“We are going to have a modern defence establishment in terms of the provision of basic requirements for your comfort and indeed for your operations.

“We already making sure that the first set of facilities are brought here,’’ the army chief said.

Buratai promised special package to the troops who captured the camp, in order to boost their morale.

“We are going to have some special packages for all of you that penetrated this forest.

“We will make sure that your morale is high by making the necessary provision for you to be comfortable,’’ he added.

On rotation of troops, he said plans were on to move out those who had stayed long in the theatre of operation.

“This is in our plan. I know that some of you were inducted here right from the depot but we are doing something for you to be properly deployed and properly accommodated as well.’’

There are reports that 3,000 troops would be inducted into the Operation Lafiya Dole this week, to replace those who had stayed long.

In an interview with newsmen after the visit, Rogers Nicholas, the Commander, Operation Lafiya Dole, said with the capture of camp Zairo ”the soul and mind of Boko Haram have been broken in Sambisa forest”.

“They don’t have a place to hide. We are still going round to make sure that some of them that are hiding in holes, we intend to fish them out,’’ Nicholas said.

He said on assumption of duty in 2017, the chief of army staff tasked him to capture Camp Zairo and clear Boko Haram from the Sambisa forest.

“Troops have finally cleared the forest of remnants and we are presently occupying camp Zairo as well as all the little settlements and camps within the forest.’’

Dauda Mohammed, a staff sgt., and one of the troops who participated in the operations that finally destroyed camp Zairo and cleared the forest of remnants of terrorists, attributed their success to the Almighty God.

“The success is from God. God almighty is the one that gave us the success which all of us are happy to be here. The Sambisa is cleared,’’ Mohammed said.

During the visit, the army chief directed principal officers, who accompanied him to visit other locations and frontline.

Accordingly, the Chief of Training and Operations, Maj.-Gen. David Ahmadu visited Bama, Borno South East to find out the needs of the troops and encourage them.