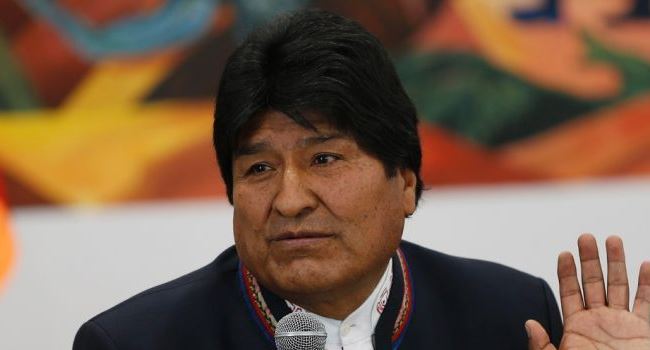 Crowds of Bolivian nationals are celebrating the unexpected resignation of President Evo Morales after protests erupted in the country over last October’s controversial election which was plagued by several allegations of voter fraud.

The capital city of La Paz witnessed jubilant scenes with many jubilating over the resignation of President Morales even as the country faced a political vacuum with no one currently in charge in Bolivia’s Presidential Palace.

“We’ve won our democracy back,” a jubilant national, Luis Ramos told Al Jazeera as he waved the national flag in the country’s capital.

Bolivia had found itself embroiled in its worst political crisis in decades after Morales secured a slight margin of victory over his principal rival, former President, Carlos Mesa, in the poll.

Protesters have filled city streets and set up roadblocks that have brought commerce to a standstill.

“The situation is very unstable and does seem to be deteriorating,” Eric Farnsworth, Vice President of the Council of the Americas told Al Jazeera from Washington, DC.

“Bolivia is traditionally a divided society. It’s divided in geographical terms, in socio-economic terms, in racial terms so there’s a lot of kindling here for a fire to really take off if calmer heads don’t prevail.”

The resignation of Morales comes a day after police guards “abandoned their posts” at the presidential palace and officers climbed a police station Saturday, displaying signs proclaiming “police with the people” amid nationwide unrest against Morales.