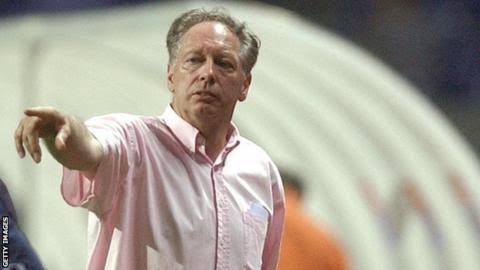 Former Nigeria coach, Bonfrère Jo has reacted to the crashing out of home-based Super Eagles from the race to the 2020 African Nations Championship (CHAN).

The Super Eagles B lost 4-3 on aggregate to the Hawks of Togo despite securing a 2-0 win at the Agege Stadium on Saturday night in the second leg of the qualifying tie.

Bonfère, who saw the game live at the Stadium alongside two Chinese scouts, said the tactics was wrong as Nigeria could have successfully upturned the 4-1 deficit from the first leg.

The Dutch was in charge of Nigeria’s U-23 Dream Team 1 that won the football event of the 1996 Olympic Games and guided the Super Eagles to a silver medal feat at the 2000 Africa Cup of Nations co-hosted by Nigeria and Ghana.

“Yes, the [Eagles] tactics was wrong,” he was quoted by Complete Sports.

“I was at the Agege Stadium. I saw the match. Togo knew Nigeria had good midfield especially after the two goals.

“They played the ball high up. Long balls in a crowd [of defenders] is not good, goals don’t come that way.

“So, they locked their defence, pushed up more players in the middle. And I thought, tactically, the Eagles didn’t get it right.

“When opponents fall back home in large numbers, defensively, you play from the wings, left, right.

“Nigeria had fast players and crosses would have unsettled Togo and goals would have come.”

CHAN, meant for players who ply their trade on the African soil, will be hosted in Cameroon next year.

Nigeria finished third in their first appearance in 2014, crashed out in the group stage in 2016, and finished as runners-up behind hosts Morocco in the 2018 edition.