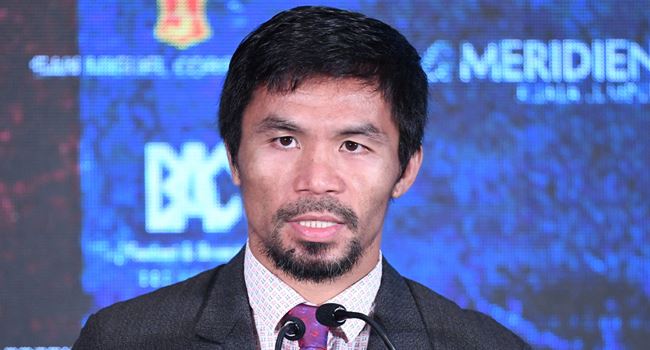 Indications have emerged, that boxing great, Manny Pacquiao would contest for the highest political office in his home country Philippines, with elections slated for 2022.

The 41-year-old, who is arguably the most popular person in his country having been one of world’s greatest boxers, allegedly revealed his intention to run to his former promoter, Bob Arum.

Pacquiao, an icon in the Philippines, has held a position serving as a senator since 2016.

Read Also: Pacquiao plans to retire after rematch with Mayweather

Rodrigo Duterte is the current incumbent, with the election to decide his successor scheduled for May 9, 2022.

Arum said in a conversation with the President of the World Boxing Council, Mauricio Sulaiman, “The first president I think we’ll get as a fighter is little Manny Pacquiao, who told me, once again.

Manny Pacquiao despite his involvement in politics is yet to hang up his boxing gloves. The last time he spoke on plans to retire, he proposed a rematch with Floyd Mayweather, who defeated him in their first meeting in 2015.

LATEST TECH NEWS: Scientists urge Facebook to tackle misinformation. 4 other things and a trivia you need to know today, June 8, 2020