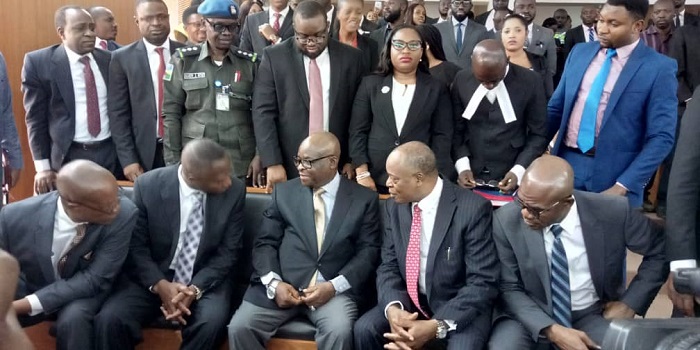 Suspended Chief Justice of Nigeria (CJN) Walter Onnoghen on Friday finally showed up at the Code of Conduct Tribunal (CCT).

He had refused to personally appear before the Tribunal ever since his trial for alleged false arrays declaration began.

The Tribunal however, on Wednesday issued a bench warrant for his arrest and arraignment today, which is believed may have forced him to appear.

On arrival, he was ushered into the dock and offered a seat, but he turned it down, preferring to stand in the dock instead.

Buhari had claimed that his action followed an order from the CCT directing him to suspend the CJN pending the conclusion of his matter at the tribunal.

The action has received wide spread reactions with many condemning it and describing it as being politically motivated.

The United States (US), United Kingdom (UK), European Union (EU) and recently, the United Nations (UN), have all condemned the suspension, arguing that it did not follow democratic process.