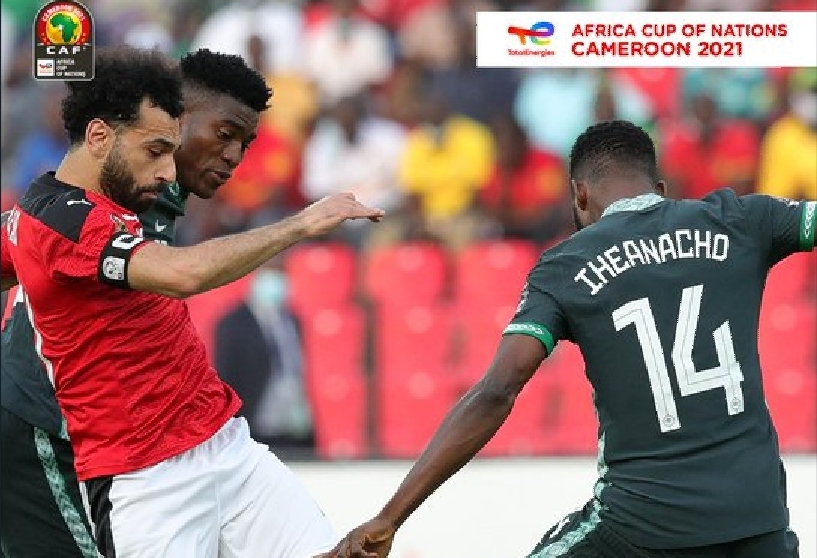 Kelechi Iheanacho grabbed the headlines ahead of his Premier League rival, Mohamed Salah after the Nigerian fired his country to a 1-0 victory over Egypt on Tuesday evening.

The game, played at the Stade Roumdé Adjia in the Cameroonian town of Garoua, was their opening Group D game of the rescheduled 2021 Africa Cup of Nations (AFCON).

Led by technical director Austin Eguaveon, the Super Eagles put up a fine performance against the Pharaohs and began their campaign for a fourth continental title on a bright note.

Nigeria dominated the game throughout, and just on the half-hour mark, Iheanacho trapped down a superb pass on in the box and fired into the top corner.

Read Also: Super Eagles, 23 others to earn cryptocurrency in AFCON

The Eagles now have four victories over Egypt in their nine meetings at the continental competition aince its inception, and today’s victory was their first since 1990.

But more than that, with the win, Nigeria successfully ended Egypt’s unbeaten run in their last 16 group matches at the AFCON.

The Pharaohs last defeat in the group stage had been back in the 2004 edition when they lost 2-1 against Algeria.

Meanwhile, defending champions Algeria were held to a disappointing goalless draw by Sierra Leone earlier in the day in Group E.

The Super Eagles will return to action on Saturday, January 15 against Sudan while Egypt will battle Guinea-Bissau the same day.

I want to win Ballon d’Or, but I’ll have a good life even if I don’t —Salah