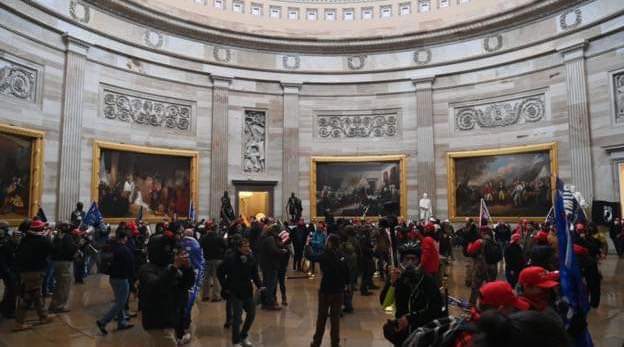 Scores of protesters on Wednesday marched into the halls of Capitol building, in the United States, bearing Trump flags and broke the barricades to demand that the November 3, 2020, presidential election be declared in favour of President Donald Trump.

Reports say a woman was shot and killed by police, and three others died in apparent medical emergencies.

The pro-Trump mob took over the presiding officer’s chair in the Senate, the offices of the House speaker and the Senate dais, where one yelled, “Trump won that election.”

They mocked its leaders, posing for photos in the office of House Speaker Nancy Pelosi, one with his feet propped on a desk in her office, another sitting in the same seat Vice President Mike Pence had occupied only moments before during the proceedings to certify the Electoral College vote.

In his bid to cling to power despite losing to a long time senator, Joe Biden, President Trump had told his morning crowd at the Elipse that he would go with them to Capitol city where the Congress took up the certification of President-elect Joe Biden’s victory.

President Trump said “If you don’t fight like hell, you’re not going to have a country anymore,” he said. “Let the weak ones get out,” he went on. “This is a time for strength.”

Yet Trump, in a video posted 90 minutes after lawmakers were evacuated, told the insurrectionists “We love you. You’re very special,” while asking them to go home.

Heavily armed officers brought in as reinforcements started using tear gas in a coordinated effort to get people moving toward the door, then combed the halls for stragglers, pushing the mob farther out onto the plaza and lawn, in clouds of tear gas, flash-bangs and percussion grenades.