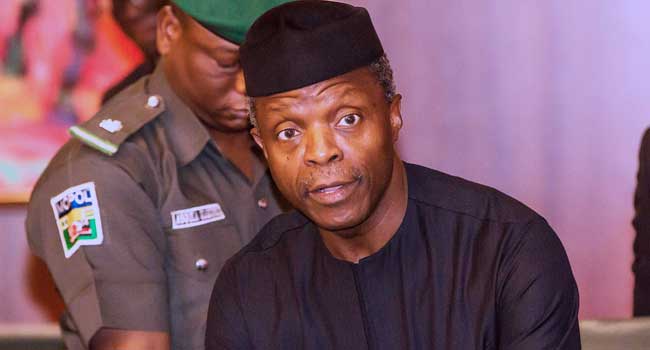 It was gathered, that Senator Babafemi Ojudu, the VP’s aide, and Physician to the VP’s wife were onboard the craft.

Laolu Akande, Senior Special Assistant to the Vice-President on Media and Publicity, confirmed the incident.

“VP Osinbajo’s Chopper crash lands in Kabba, but he and the entire crew safe. He is continuing with his engagements and plans for the day in Kogi State,” Akande said via Twitter.

Osinbajo came out of the chopper unhurt and immediately continued his campaign in Kabba, receiving a warm welcome from residents as his team drove through the town.

Speaking after the incident, Osinbajo said, “All thanks and glory to God, the chopper we boarded today from Abuja just crash landed in Kabba, Kogi State, and the entire crew plus myself are all safe.

“We are continuing with our Next Level Engagements and plans for Kogi State.”

This will be the second time Osinbajo will escape helicopter crash in eight months.

On June 7, 2018, the chopper that conveyed Osinbajo from the Nigeria Customs Command and Staff College, Gwagwalada, Abuja, was forced to land few seconds after take off.