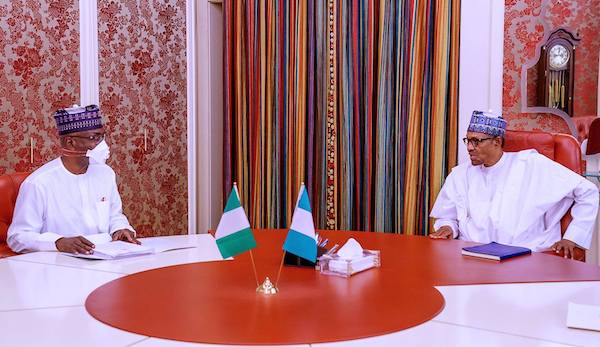 Kwara State Governor, AbdulRahman AbdulRazaq, on Tuesday met with President Muhammadu Buhari on the flood situation in the state.

The governor, who briefed State House correspondents at the end of the meeting with the president, said he requested the Federal Government’s assistance for victims of the disaster.

He added that over 15,000 people had been displaced by floods in Kwara State.

The governor, therefore, urged President Buhari to come to the aid of the displaced persons, saying property and farm products worth about N10billion had been destroyed by the disaster.

He expressed the hope that the federal government’s assistance would help to ameliorate the sufferings of victims of the disaster.

AbdulRazaq said: “I came to see the president, among other things, to discuss ecological and developmental issues.

“Over the weekend, we had a huge rainstorm that destroyed about 5,000 houses in the state capital. We had huge flooding in Kwara North and the bank of River Niger.

“There are a lot of internally displaced people in the state capital. The state needs assistance to abate the crisis.

“We have about 5,000 houses and thousands of hectares of farmland that are under water. Close to about 10,000 to 15,000 people are already displaced so far. So, it’s straining the state’s economy.”

The governor, however, expressed the hope that the state would witness a bumper harvest this farming season despite the incident.

He added: “Luckily for us, we did two cycles of rice farming in the affected areas. We are hoping to do three cycles. Yes, there is a huge impact.

“We are expecting a bumper harvest this season, especially with the federal government’s intervention in the agricultural sector.”