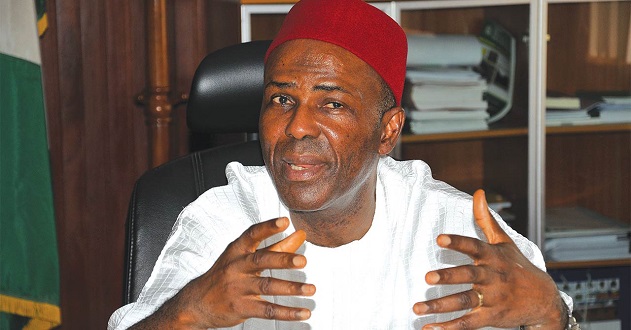 The Minister of Science and Technology, Ogbonnaya Onu, has revealed that President Muhammadu Buhari has approved the establishment of a new agency for Robotics and Artificial Intelligence in the South East region of the country.

Onu stated this Saturday in Abakaliki, the Ebonyi State capital, at a rally organised by the party to welcome some new members who recently decamped from the People’s Democratic Party (PDP) in the state.
The minister said in 2015, he urged the South East not to put its eggs in one basket to no avail.

He said that in addition to the Second Niger Bridge and many federal roads in the zone, Buhari has also approved a new agency for robotics and Artificial Intelligence to be established in the South East.

“The time has come for the South east to be in the mainstream of Nigerian politics by voting for President Buhari and APC in 2019,” he said.

He urged the people not to give their PVCs to anybody but to guide it jealously as it is the only way they can return President Buhari in 2019.

Also speaking, the National Chairman of the All Progressive Congress (APC), Adams Oshiomhole, alleged that politicians in the country were exploiting the killings to score cheap political points, urging Nigerians to not be deceived by them.

He said there was an agenda to make the government of President Muhammadu Buhari look bad by attributing all the killings in some states in the country to Fulani herdsmen.

“Let me urge you to be more careful because this season people are spreading untruth. People are being hired to turn the gospel upside down. They want us to believe that every problem should be explained in ethnic and religious terms.

“We have a problem and we must confront those problems. Criminals must be dealt with individually as criminals and government at all levels must work hard to protect every Nigerian regardless of tribe or religion,” he said.

He said President Buhari and the security agencies were working hard to put an end to the insecurity.

Oshiomhole urged the people of the South East to vote for APC and President Buhari in 2019 as he has brought development to the zone.

Former Governor of Abịa State, Orji Uzor Kalu, said the Second Niger Bridge, which the PDP could not construct in 16 years, has now reached 53 per cent completion.

He also noted that work is progressing in the two major highways in the zone, the Onitsha to Enugu Road and the Enugu-Port Harcourt expressway.

According to him, the South East will give the president and APC majority of its votes in 2019 to repay him for all the projects he has executed in the zone.

Some of the decampees who were received include, Senator Sunny Ogboji, former Minister of Power and Steel, Goody Ogbaga, for Secretary to the State Government, Ifeanyi Odoh, and former Speaker of Ebonyi State House of Assembly, Augustine Nwankwegu.

The rally was originally scheduled to hold at the Pa Oruta Ngele stadium Abakaliki but was later moved to a playground near the Enugu-Abakaliki expressway following the refusal of the state government to grant the APC permission to use the stadium.

I was almost losing hope in Nigeria— IBB