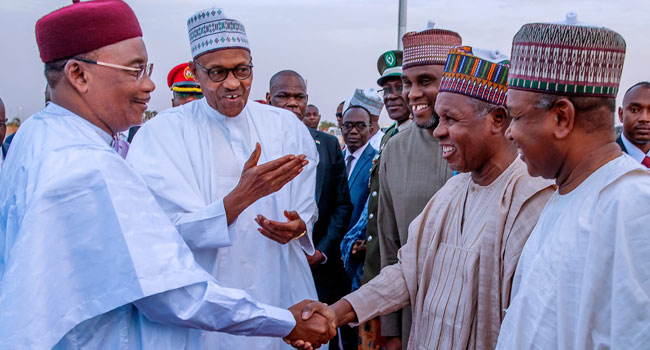 President Muhammadu Buhari has arrived Niger Republic where he will be attending the 12th Extraordinary Session of the Assembly of the Union on African Continental Free Trade Area (AfCFTA) in Niamey.

President Buhari, along with members of his entourage, departed the presidential wing of the Nnamdi Azikiwe International Airport, Abuja on Saturday morning.

The President was received at the Diori Hamani International Airport by President Mamadou Issoufou.

He was subsequently treated to airport ceremonies involving a guard of honour mounted by a detachment of Nigerien military forces as well as cultural display.

The Extraordinary Session of the Assembly of the Union is expected to launch the operational instruments of the Agreement establishing AfCFTA, which Nigeria is expected to sign.

President Buhari will also participate in the First Mid-Year Coordination Meeting of the African Union (AU) and the Regional Economic Communities (RECs).

CORRUPTION ALLEGATION: Our records are open for public scrutiny-NDDC