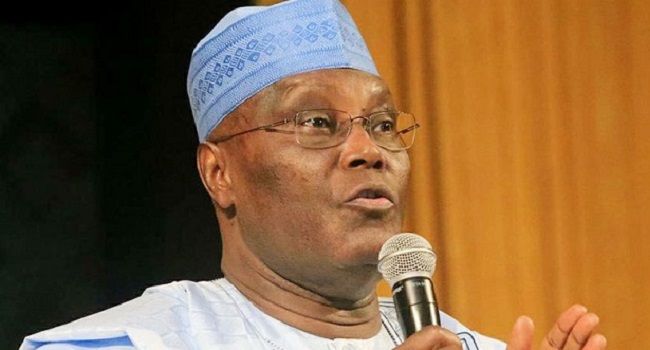 The presidential candidate of the Peoples Democratic Party (PDP), Atiku Abubakar, has said that President Muhammadu Buhari cannot be trusted to implement the minimum wage of N30,000 which the tripartite committee submitted to the federal government for approval.

In a statement issued by his media office, the presidential hopeful said Buhari is known for “flip-flopping” and may not have the political will to implement the new wage which he said does not even translate to a “living wage”.

”Our attention has been drawn to a statement from the Presidency denying President Buhari’s earlier pledge to pay the new minimum wage of ₦30,000 agreed with the Nigerian Labour Congress and other labour affiliates in a signed communiqué.

”This approbation and reprobation is characteristic of the Buhari administration and is evidence of the lack of leadership at the very top that is putting our economy in peril,” the statement said.

It said Buhari has failed to note that the workers are the goose that “lay the golden eggs” which members of his administration are enjoying. It added that the government has become synonymous with flip-flopping in policy implementation.

”Just two weeks ago, two of the world’s largest banks, HSBC and UBS, pulled out of Nigeria citing lack of policy stability as their reason. This same reason was given by Procter and Gamble when they pulled out last year. In the span of the three years that this administration has been in office, more than 500 companies have pulled out of Nigeria for similar reasons. Nigeria under President Buhari has become synonymous with policy flip-flopping.

”A government is only as reliable as its word and if its word is not reliable then nothing else about the government will be stable. This is why Nigeria suffered from a recession under this administration and is right now at risk of another recession.

”At the risk of repeating ourselves, we urge the Buhari administration to note that Nigerian workers are the goose that lays the golden egg that top members of this government are enjoying to the detriment of those laying the egg.”

It also questioned the funds accruing to the president and Vice President Yemi Osinbajo as wages while Nigerian workers suffer from poverty.

”We are aware that both President Buhari and Vice President Osinbajo, despite living and feeding at the public expense, collect a hardship allowance of 50 per cent of their annual basic salary, whereas, the long-suffering Nigerian workers, who are the main sufferers of the hardship caused by the incompetence of this administration, do not have any hardship allowance and are expected to live on the unlivable minimum wage of the Buhari government.

”It is a testament to how badly we have treated our workforce over the last three years that Nigeria was officially declared the world headquarters for extreme poverty by the World Poverty Clock and the World Economic Forum. We can only change this by paying our workers a living wage as opposed to the starvation wages now paid to them by the Buhari administration.

”We, therefore, call on President Muhammadu Buhari to keep faith with the agreement his government freely reached with labour and affirm the new minimum wage.”

Did workers rejoice too soon? Presidency says Buhari yet to decide on N30,000 minimum wage