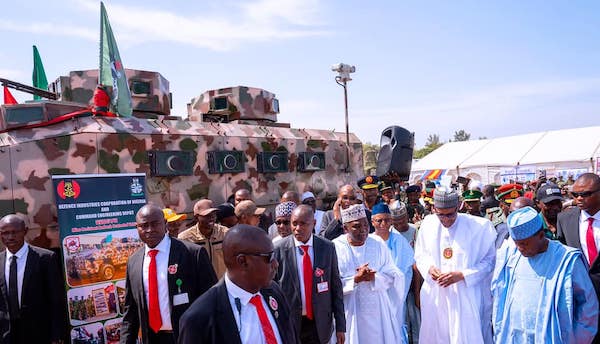 The vehicle which would be used for military operations in the North-East, was commissioned in Kaduna at the opening of the 2019 Chief of Army Staff Annual Conference.

The war vehicle code-named ‘Ezugwu’ was manufactured by the Defence Industrial Corporation of Nigeria, Kaduna.

While in Kaduna, the President also commissioned the ultra-modern Army Reference Hospital.

He commended the Nigerian military for defending the territorial integrity of the country.

He also called on them to always respect human rights and international humanitarian laws in the conduct of their operations across the country.

The President emphasized the commitment of his administration to supporting the military in its modernisation quest.

He said, “This government is aware that activities of the army come with key consequences, with some personnel who have sustained various injuries.

“I once again send my condolences to those who have paid the supreme sacrifices in an effort to secure this country. May their souls rest in peace.

“I urge our soldiers to continue to abide by their ethics and keep to the rules of engagement and code of conduct while ensuring that human rights and international humanitarian laws are promoted and respected in the conduct of military operations,” he said.

“There is no doubt that a lot has been achieved by the Army since my assumption as the president.”