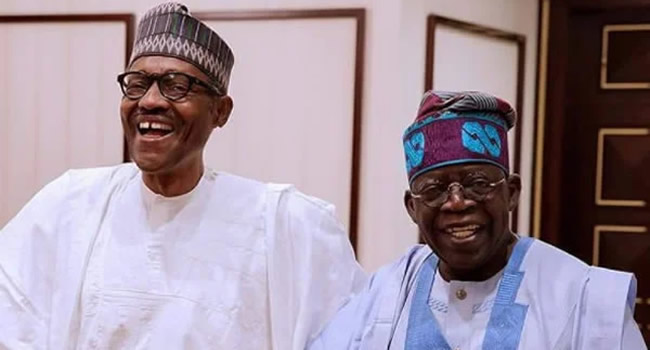 The Director-General of the Voice of Nigeria (VON), Osita Okechukwu, said on Thursday there is no 2023 succession agreement between President Muhammadu Buhari and the National Chairman of All Progressives Congress (APC), Bola Ahmed Tinubu.

Okechukwu, who was a former member of the Congress for Progressive Change (CPC), stated this in a chat with journalists in Abuja.

He also commended the APC national leadership for considering the idea of a consensus candidate for the 2023 presidential election.

He insisted that the ex-Lagos State governor is one of the top favourites for the APC presidential ticket because of his significant role in the party’s successes in 2015 and 2019 elections.

The VON chief said: “Many of us slept well last (Wednesday) night after reading the a profound statement from the social media credited to Distinguished Senator John Akpanudedehe, our National Secretary that at the appropriate time APC will come up with a consensus and agreeable presidential candidate that will fly its flag in 2023.

“I hail the consensus proposal for it is a deft move which will perish the phobia of implosion of our great party as touted by some naysayers.

“First it is refreshing that President Buhari is not for 3rd term agenda. Second, in my slightest imagination one doesn’t think any committee handling such delicate matter will miss out on our national leader, Asiwaju Bola Ahmed Tinubu, in the matrix.

“Methinks, he will be among the top aspirants to be considered, given his immense contribution to the success of our great party in 2015.

“There were rumours of a succession agreement between President Buhari and Tinubu. But on a personal level and as a member of the defunct CPC, I never heard of such an agreement. Mr. President rarely enters into any formal or informal agreement with anybody. But he appreciates good deeds.

“All I know was that Asiwaju automatically could have been the Vice President if not for what lawyers will call force majeure. For our leadership warned against Muslim/Muslim ticket. Our leadership then argued that the Abiola/Kingibe Muslim/Muslim ticket which worked in 1993 may not work in 2015, if Buhari/Tinubu both Muslims were to run, as the scenario differs. That was how Asiwaju nominated Prof. Yemi Osinbajo as a replacement.”