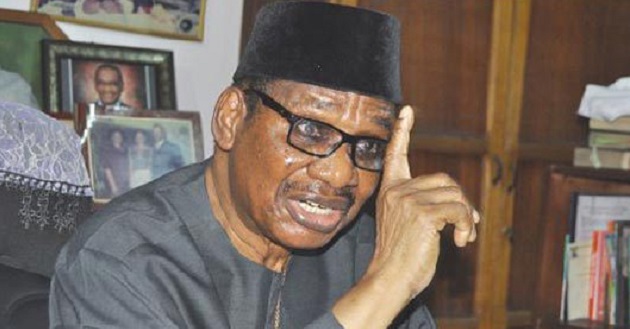 Sagay made this known in a statement on Thursday.

The Senior Advocate said President Muhammadu Buhari’s threat that ballot box snatchers could lose their lives ought not to evoke fear in the minds of persons who have no intention of engaging in election malpractice.

He said, “The controversy arising from the President’s warning that anyone snatching ballot boxes or violently disrupting the coming elections may be doing so at the risk of his life is uncalled for. It is a very timely and benevolent advice.

“In the first place, anyone not planning to snatch ballot boxes or disrupt the election process has nothing to worry about. If it is assumed that those expressing anger and dismay in the media are not planning to commit any of these offences, then why take Panadol for someone else’s headache?”

Sagay noted that the Electoral Act prescribes a prison term of two years for stealing of election materials. He, however, said if the ballot box snatcher is armed, then the rules of engagement have to be adjusted.

The PACAC chair said, “Of course, regardless of whatever section or scenario it is, if the ballot snatchers or election disrupters are armed, they are goners. The security men have a complete right of self-defence. So the President’s admonition is not far from the reality of our law.”

Sagay said many of Buhari’s critics that declared the President’s statement as illegal did not do the necessary research.

He added, “It is true that under Section 118 paragraphs (f)(i)(j) of the Electoral Act 2010, destroying or removing ballot papers is liable on conviction to two years imprisonment only. This by implication applies to anyone who disrupts the voting process in any way.

“But the matter cannot end there. What if the culprit starts running away with the ballot box and other voting materials? The security agencies and even the ordinary citizens are entitled by law to chase after him with the intention of apprehending him and recovering the materials.

“Now the critical factor is what level of force can be applied to stop him. Section 261 of the Criminal Code provides: It is lawful for a person who is engaged in the lawful execution of any sentence, process or warrant, or is making any arrest, and for any person lawfully assisting him, to use such force as may be reasonably necessary to overcome any force used in resisting such execution or arrest.

“Thus, such a person can intentionally be shot dead, only if the penalty for his offence is seven years and above. The security or arresting official is allowed to use such force as may be reasonably necessary in securing the arrest. If the ballot box snatcher has fleeter foot (i.e., faster) than the security men, reasonable force to stop and arrest him could include shooting his legs to stop him.”