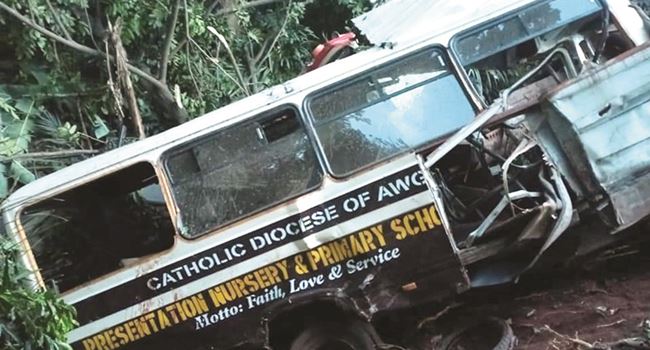 Following the vehicle accident between a truck and a school bus conveying puplis that claimed lives in Enugu State, President, Muhammadu Buhari, on Friday, expressed sadness and sent out his condolences to the family of the deceased.

The tragedy which struck on Wednesday afternoon after school hours, at Nkwo junction, Awgu Local Government Area of the state, left no few than 21 persons, including school children dead.

Others were said to have sustained varying degrees of injuries and where rushed to the University of Nigeria Teaching hospital, Enugu for treatment.

The pupils were of the Presentation Nursery and Primary school, Agwu, operated by the Catholic Diocese of Awgu, Enugu State.

The Federal Road Safety Corps (FRSC), attributed the incident to a mechanical fault.

The president’s condolence message was contained in a statement by his Special Adviser on Media and Publicity, titled “President Buhari mourns victims of Enugu crash involving pupils.”

According to Adesina, Buhari is urging vehicle owners to ensure roadworthiness, as initial reports attributed the accident to brake-failure by the truck involved.

The statement read, “President Muhammadu Buhari is saddened by the gruesome vehicle accident in Mgbowu, Awgu Local Government Area of Enugu State, in which scores of people died, most of them school pupils.

“The President condoles with families and kith and kin of the dead, praying that God will grant them succour, and spare the country of such tragedy in future.

“He also commiserates with the Catholic Church of Awgu, which runs Presentation Nursery and Primary School that the pupils attended, and the Enugu State Government.

“President Buhari enjoins vehicle owners to ensure roadworthiness, as initial reports attributed the accident to brake-failure by the truck involved.”