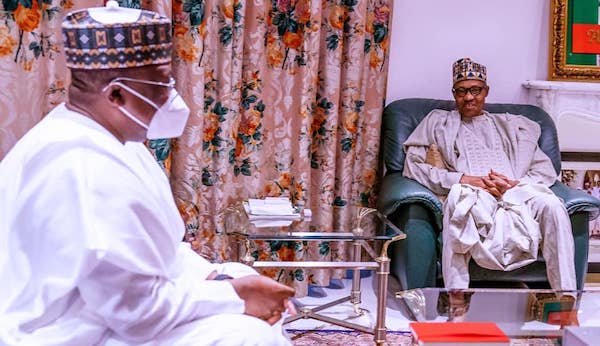 President Muhammadu Buhari on Sunday met behind closed doors with the Senate President, Ahmad Lawan, at the Presidential Villa, Abuja.

The issues discussed at the meeting include the security challenges in the country, performance of the Service Chiefs, and the crisis in the All Progressives Congress (APC).

Lawan, who spoke with State House correspondents at the end of the meeting, said he briefed the president on issues that were discussed at the senate, particularly on the security challenges plaguing the country.

He said: “You know that the country is facing many serious and deep security challenges and I have come to meet with Mr. President to discuss with him what we have discussed in the Senate. I told him that we should do whatever it will take to improve the security situation in the country.

READ ALSO: ‘Boko Haram has metamorphosed from a group of religious zealots into an industry’ —Lawan

“And we believe that the Senate and indeed the National Assembly is positively disposed to receiving even supplementary budget purposely to address the fundamental needs of the security agencies in the country so that we will be able to empower them to fight the Boko Haram in the North East, banditry and other security challenges across the country.

“Secondly, in the Senate, we believe that we need to provide more resources for recruitment by the security agencies, the Army, the Navy, the Air Force, the police, and the Immigration. The paramilitary generally needs to also have more manpower and personnel and this is not something that we can get on a platter of gold. Whoever wants to make an omelet will have to break eggs.

“I also had the opportunity to talk to my leader, the President about the challenges in APC. I believe that we have to deal with these challenges, this is the ruling party of the Federal Republic of Nigeria, with the President, with the control of the National Assembly, with more governors than any other political party, the situation should not and must not be allowed to degenerate further than it has.”