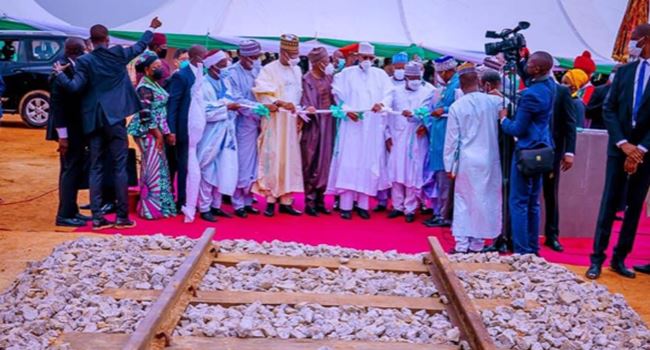 President Muhammadu Buhari has laid the foundation stone for the $1.2 billion Kano-Kaduna rail project two weeks after Minister of Transportation, Rotimi Amaechi, promised Nigerians that the project will be flagged off.

At the ground-breaking ceremony of the standard gauge railway line held on Thursday at Zawaciki area of Kano State, Buhari also commissioned the three-layer Dangi interchange bridge at Zaria Road by Zoo Road in the metropolis.

While performing the ceremony, the president said the project will connect Kano to the Abuja-Kaduna train service and Kaduna to Ibadan and Lagos with a focus on linking the Lagos ports.

“This project is crucial to the establishment of a supply chain in railway transport within its corridor, Kano–Kaduna–Abuja, as it links the major commercial cities of Kano and Kaduna to the Federal Capital Territory, Abuja,” he said.

“Upon completion, the Kaduna–Kano railway project is to link the Lagos– Ibadan Railway project via Abuja, Minna, Ilorin, Oshogbo, Ibadan to Lagos on one end, and Maradi, Niger Republic on the other.

“This railway connection when completed will establish the ports in Lagos, as the choice for import and export business of the people of landlocked Niger Republic.

“This would positively drive our economies through employment from new business opportunities and wealth creation.”

Also speaking at the ceremony, Amaechi said the scope of the railway project involves a 203 kilometre double track standard gauge railway from Kano to Kaduna.

“The project will no doubt improve the standard of living of citizens within its corridor, create employment and promote trade.”