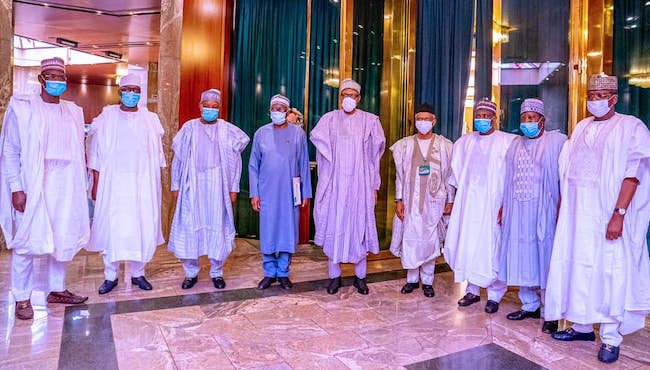 President Muhammadu Buhari on Wednesday held a closed-door meeting with some governors from the northern part of the country at the Presidential Villa, Abuja.

The meeting was aimed at addressing the worsening insecurity in Northern Nigeria.

The Zamfara State Governor, Bello Matawalle, who briefed the State House correspondents at the end of the meeting, said peace is gradually returning to the north with the new security roadmap adopted by the Federal and state government to secure the region.

He said security agents are working hard to check the problem, adding that the atmosphere in Zamfara has been calm, at least in the last four months.

The governor said: “For now, for the past four days no incidence had been recorded by the security agents. But yet we are doing our best and the surety are also doing their best to make sure that they tackle all the challenges.

“I assure you that we are on top of the matter and the President has assured all of us that he’s going to take more measures on the issue of insecurity in the northern part of the country.

“I can say we have not had much crisis in the last four months. The security agents are doing their best now, particularly from the new security architecture that we have adopted now, we are having some improvements on the challenges.

Related Topics:#featuredBuhariNorthern Governors
Up Next

Nigeria will overcome its challenges – ACF