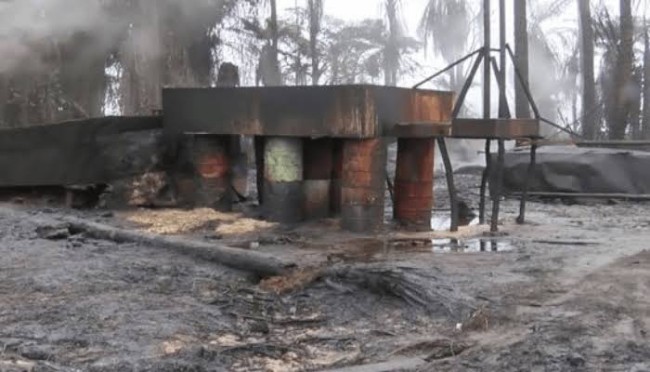 To protect residents’ lives, President Muhammadu Buhari has urged the nation’s security and intelligence services to step up the crackdown on illegal refineries.

The instruction, according to the presidential adviser, came after scores of people were reported killed when an illegal refinery detonated in Abaezi woodland in Imo’s Ohaji-Egbema Local Government Area on Friday night.

An unspecified number of people were also burnt beyond recognition following an explosion at an illegal oil refinery in Rivers State on Saturday.

The Director-General of National Oil Spills Detection and Response Agency (NOSDRA), Mr. Idris Musa, who confirmed the explosion to journalists in Port Harcourt, had said the agency would investigate the cause of the incident.

The President, reacting to what he called a “national disaster” and a “catastrophe,” said responsibility for the loss of life and property must fall on everyone.

The President also expressed his sympathies to the victims’ families, the Ohaji Egbema community, and the government and people of Imo, as well as the “whole depth and extent of the nation’s shock and pain.”

He asked community leaders, police, and the secret service to ensure that the tragic episode never happens again in any region of the country.

On Saturday, a fire that engulfed an illegal crude oil refinery complex in Abaezi forest, in the Ohaji-Egbema Local Government Area of Imo State, had killed at least hundreds of people.

Approximately 150 others, according to eyewitness reports, suffered major burns.

The State Commissioner for Petroleum Resources, Goodluck Opiah, who spoke on behalf of Governor Hope Uzodinma of Imo State during his visit to the scene, said the fire claimed the lives of a large number of young people.

Okenze Onyewoke, the proprietor of the illegal refinery, has been proclaimed wanted by the Imo State government, according to Opiah.