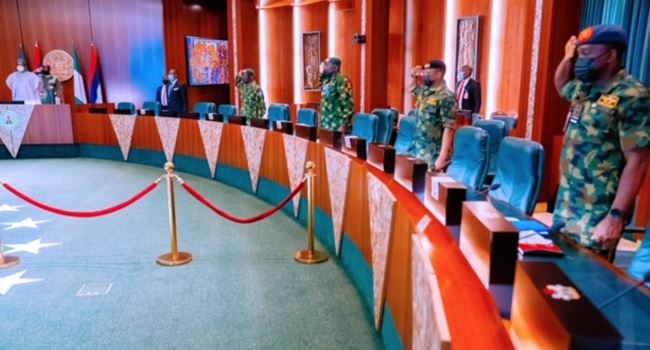 President Muhammadu Buhari on Tuesday met with members of the National Security Council (NSC) at the Council Chambers of the State House in Abuja, over the lingering insecurity situation in the country.

The meeting which commenced at about 9am on Tuesday had in attendance the Vice President, Professor Yemi Osinbajo, Secretary to Government of the Federation, Boss Mustapha, and Chief of Staff to President, Prof. Ibrahim Gambari.

Others at the meeting were the Minister of Defence, Maj. Gen. Bashir Magashi (Rtd), Minister of Police Affairs, Maigari Dingyadi, Minister of Interior, Rauf Aregbesola, as well as Chief of Defence Staff, Major General Lucky Irabor, other Service Chiefs and Inspector General of Police, Mohammed Adamu.

The meeting is expected to review the current security situation in the country with a view to addressing the rising cases of kidnapping and banditry.

The meeting of the NSC is coming at a time the country is bedeviled with a series of security challenges especially abduction of school children, with the most recent being the abduction of schoolgirls from the Government Girls Secondary School, Jangebe, in Talata Mafara local government area of Zamfara State on Friday, February 26.

The girls were released on Monday and were received by Governor Bello Matawalle at the Government House in Gusau, the state capital.

Blockade of cattle, foodstuff from north an act of war –Yoruba youth group