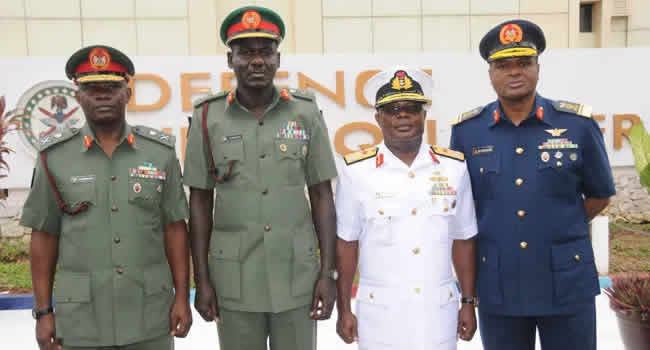 President Muhammadu Buhari has vowed to investigate the immediate past former service chiefs in the country, as the federal government has discovered that funds budgeted to buy arms in the fight against terrorism has gone missing.

The National Security Adviser (NSA) to the President, Maj.-Gen Babagana Monguno (retd.), stated this in an interview with the BBC Hausa service.

Monguno, who spoke on Friday, said some funds meant for the purchase of arms to strengthen the country’s anti-terror war got missing under the leadership of the ex-service chiefs.

“No one knows what happened to the money but by God’s grace, the president will investigate to find out whether the money was spent, and where the arms went.

Also, the NSA said the new service chiefs have not seen any of the arms that the funds were provided for.

This comes after President, Muhammadu Buhari, nominated the immediate past service chiefs of the country as ambassadors just about nine days after he replaced them, having spearheaded the country’s security agencies for over five years.

Against expert recommendations, the Senate rushed to confirm the immediate past service chiefs as non-career ambassadors, a move which was criticised by the mass.

Monguno also said that the Nigerian government was not interested in dialogue with terrorists, bandits and other criminals as negotiation paints the government as weak and incapable.

The NSA, therefore, vowed that the military, headed by the new chiefs has what it takes to crush the enemies of the Nigerian state without the help of mercenaries.

Related Topics:#featuredArmsBuhariBurataiex-service chiefs
Up Next