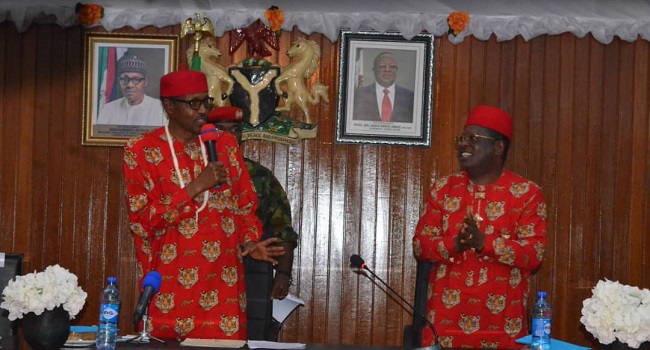 David Umahi, Governor of Ebonyi State, says President Muhammadu Buhari will “definitely” have more votes in the South-East region in 2019 than he did in 2015.

Umahi also said he asked 2,000 people to attend President Muhammadu Buhari’s campaign rally in Ebonyi because he did not want the president to feel he was not liked by the people of the state.

According to Daily Sun, Umahi said this shortly after the president’s departure.

He said not only did he allow the APC to use the state’s stadium but he also renovated it.

He said if he had not sent people over, the stadium would have been empty.

“Now, the crowd you saw there at the stadium, 2,000 of them, were from me because I know they (the APC) have nobody,” he was quoted as saying.

“But for it not to seem like Ebonyi people don’t love Mr. President, I had to make available 2,000 persons to come and cheer the president.

“That is why if you check the crowd, while they were castigating me unduly, the crowds were not clapping’, the people were not happy. But for the respect they have for Mr. President, they could have booed them. I had to do what I did because I’m not into extreme politics; I’m into politics for development.”

The governor added that even though he belonged to a different political party, “the support for Mr. President as a governor, is what we are doing.”

“We are supporting him; that is our support for him. We acknowledged publicly what he, Mr. President, is doing for Ebonyi state; that is the support we are giving to him,” he said

“Morally and ethically, I am not supposed to come out and start shouting while I’m still holding the ticket of PDP and saying ‘vote APC president.’

“But there are many ways of giving support, as the chairman of South East Governors Forum; we have given Mr. President a very good landing opportunity in the South East and definitely he will have more votes that he had the other time.”