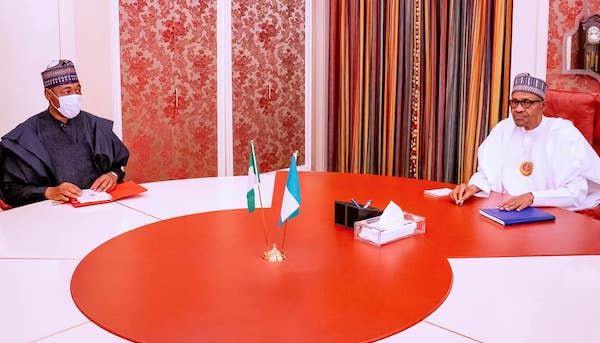 The Special Assistant on New Media to the president, Lauretta Onochie, disclosed this on her Twitter handle.

She also shared pictures from the meeting on Twitter.

Although the details of the meeting have not been made public, it may not be unconnected with the worsening insecurity in the North-East.

The North-East, particularly Borno State is the hotbed of Boko Haram insurgency in the country.

The state had witnessed several terror attacks in the last 10 years.

Several Nigerians had demanded President Buhari’s resignation over worsening insecurity in the country.

The president had particularly drawn the ire of Nigerians for refusing to sack the service chiefs, who many argued had outlived their usefulness.

Buhari was invited by the House of Representatives to address the lawmakers on the country’s security challenges earlier this month.

However, the president did not honour the invitation.