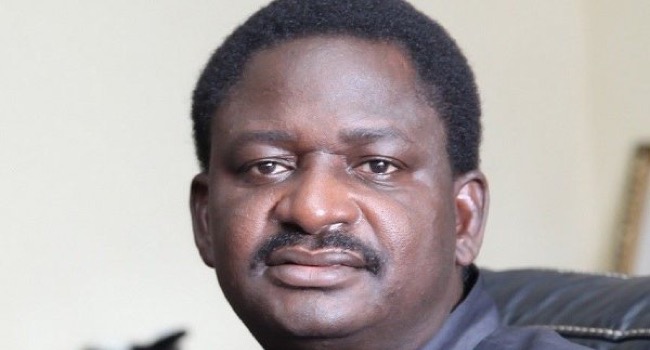 The claim by the Peoples Democratic Party (PDP) that Muhammadu Buhari’s trip to Japan was a poor and disgraceful outing has got the president’s spokesman, Femi Adesina fuming.

PDP had in a statement, after Buhari returned from Japan where he attended the 7th Tokyo International Conference on African Development (TICAD7), described the trip as a fruitless one.

But Adesina, Buhari’s special adviser on media and publicity, said anybody operating from PDP headquarters in Abuja, where the statement criticising Buhari’s Tokyo trip was issued “talks gibberish.”

In a post on his Twitter handle, Adesina said, “In PDP’s hallucinations, TICAD7 was not a success for Nigeria, since PMB came back with only ‘promissory notes’.

“Did they think it was a buying and selling session? Wadata House must now be Hammer House of Horror, and anybody operating from there simply talks gibberish.”

PDP, in the statement that got them branded as talking rubbish, had said:

“It is lamentable that while President Buhari and his party, the All Progressives Congress (APC) are reducing our nation by celebrating a mere pledge of $300,000 (N108 million) from the Japanese Prime Minister and a promissory note for 50 million euros from an EU Commissioner, his Ghanaian counterpart, Nana Akufo-Ado had sealed a deal with automobile giant, Toyota, to immediately establish a Toyota and Suzuki manufacturing plant in Ghana with a determined timeline of August 2020 for production.

“The multinational had also signed a deal to establish a similar plant in neighboring Ivory Coast with a Memorandum of Understanding to that effect already signed last Thursday.

READ ALSO: ASO ROCK WATCH: ‘Fake Buhari’ in Tokyo; When IPOB, Kanu took the rest of us for fools

“It is instructive to note that Toyota announced that it preferred to cite the plant in Ghana because of the favourable economic climate prevailing in the country; a climate, which has taken flight from Nigeria under President Buhari and worsened since the rigging of the presidential election.

“It is saddening that because of President Buhari, our nation, which, under the PDP had excelled to become one of the world’s fastest growing economies and a hub for Foreign Direct Investments, is now descending into a pariah and beggarly nation with no hope in sight.”