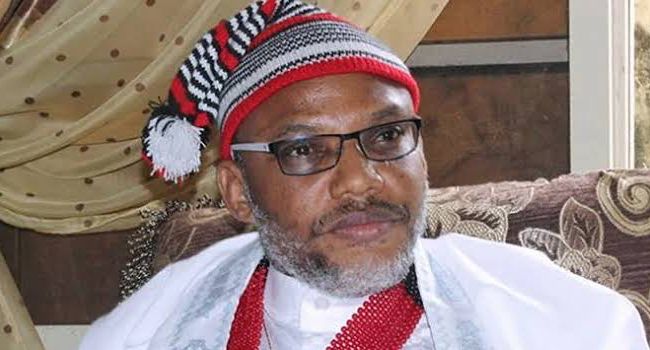 Lead counsel to embattled Nnamdi Kanu, leader of the outlawed Indigenous People of Biafra (IPOB), Ifeanyi Ejiofor, has described comments by President Muhammadu Buhari against his client as “utterly mischievous, careless and false.”

Buhari supposedly made the comments while interacting with the UK Prime Minister Boris Johnson before the Commonwealth Heads of Government meeting in Kigali, Rwanda.

Buhari had, while briefing Johnson on why the Federal Government will not grant bail to Kanu, said the IPOB leader had once jumped an administrative bail in the past and as such, the Nigerian government was not inclined to granting him another bail due to his antecedents.

But while countering the President in a statement on Friday, Ejiofor said the comments only confirmed the President’s alleged partisan stance on the matter concerning the Biafran agitator.

Describing Buhari’s comments as “careless, mischievous, and utterly false”, Ejiofor said Kanu did not jump bail but was compelled to flee the country after his life was threatened by Nigerian soldiers who invaded his residence in Afara-Ukwu, Umuahia, Abia State, in September 2017, while on bail.

Ejiofor said Buhari’s comments coming barely a week before Kanu was billed to appear at the Federal High Court in Abuja on June 28 for the continuation of his trial, was intended to influence the court ruling in favour of the government.

“What really was the raison d’ etre for the statement? Is it a veiled warning to the court? Does it preempt an already settled position? Is there a nexus between this statement and the ultimate decision that would eventuate on the application?” the lawyer said.

“It is our apt observation that President Buhari, with greatest respect to his office, stands in grave contempt of the court proceedings by this singular declaration, and should be made to appear in Court to answer to this contemptuous statement,” Ejiofor added.

He also called on the international community to take note of Buhari’s comments and urged the court to remain firm in the discharge of her judicial functions and uphold justice without bowing to pressure.

APP to sue Tinubu over alleged perjury, irregularities In documents submitted to INEC