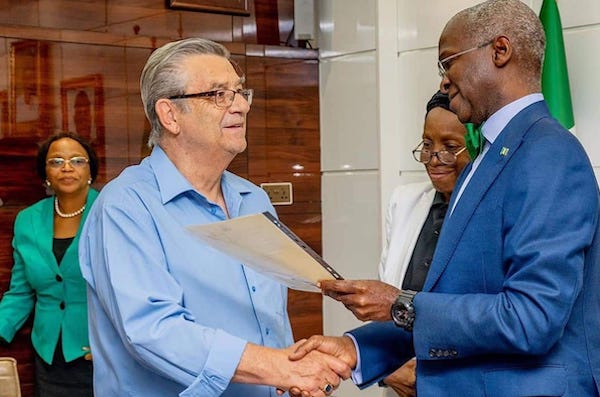 Minister of Power, Works and Housing, Babatunde Fashola, has asked for an immediate presentation to his ministry on the promise made to members of the 1994 AFCON-winning Super Eagles team.

Fashola made the request on Monday in Abuja while presenting on behalf of government documents of an apartment allocated to former Super Eagles Chief Coach, Clemens Westerhof.

14 years after the Super Eagles’ first triumph in Lagos in 1980, the team led by Westerhof had won the Africa Cup of Nations (AFCON) at Tunisia.

They went on to shock the world at the 1994 FIFA World Cup in the U.S., where they lost in the second round 1-2 to Italy after extra time.

The feat had spurred the then Sani Abacha-led Government to make a promise of presenting apartments to members of the team.

As part of efforts to ensure the fulfilment of this promise, Fashola requested that the Nigeria Football Federation (NFF) immediately document names and details of members of the team who were yet to receive the promised apartments.

“I want the NFF to document those members of the squad who have not received their houses in the FCT as promised, and as soon as we receive this, we will respond positively.

“I was made aware that the promises had not been fulfilled through a letter by the assistant coach, Johannes Bonfrere, and we arranged for him to get his own in December 2017.

“Six months later, at the FIFA World Cup in Russia, a prominent journalist, Onochie Anibeze, brought it to my notice that the head coach was yet to receive his own house.

“We immediately initiated the process which has culminated in today’s event. But we need to ensure this kind of situation does not recur.

“The NFF should not just stop at preparing the teams, but also ensure it follows up on all other matters related to its players and officials.”

Speaking earlier, Amaju Pinnick, the President of NFF, had said the presentation to Westerhof would go a long way in rebuilding confidence in the country’s national players.

“It will make them to be sure that whenever a promise is made, it will be fulfilled.

“The players concerned, led by Austin Eguavoen, had recently at a function in Lagos asked us to move in to ensure the promise is redeemed.

“They have been asking and asking, and we hope our dear minister (Babatunde Fashola) will help us further to get the promise redeemed,’’ Pinnick, who was represented by Shehu Dikko, the federation’s Second Vice-President, said.