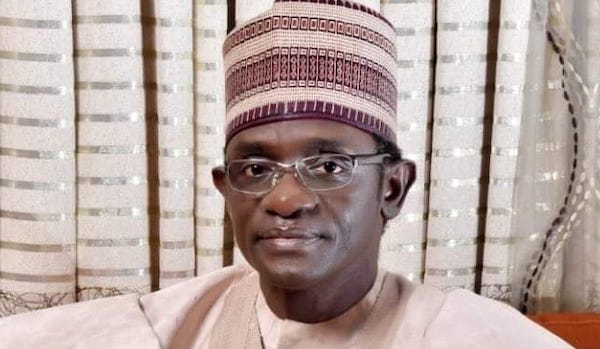 The Chairman of All Progressives Congress Caretaker/Extraordinary Convention Planning Committee, Mai Mala Buni, declared on Saturday night that his team achieved its objectives.

Buni, who is also the Governor of Yobe State, stated this in his valedictory speech at the Eagles Square, Abuja, the venue of the party’s national convention.

The governor was appointed the acting chairman of the ruling party following the dissolution of the Adams Oshiomhole-led National Working Committee (NWC) on June 25, 2020.

He thanked President Muhammadu Buhari, and his colleagues in the Progressives Governors’ Forum for their support.

Buni noted that his team restored peace in state chapters of APC where conflicts were reported and brought sitting governors from the Peoples Democratic Party (PDP) into the party.

He said: “Upon assumption of office, the committee embarked on a genuine and all-inclusive reconciliation process to give everyone a true sense of belonging, confidence, and reassurance in the collective ownership of the party.

“We, first of all, visited some critical stakeholders to engage them in resolving the disputes and other hanging disagreements in the party. While some of these visits were made public, others were done out of the public glare and without media publicity. Similarly, we visited some aggrieved chieftains who sincerely shared their ill feelings with the committee. We spoke to each other frankly, placing party interests above personal interests.

“I am glad to state that those frank discussions built a new hope in the hearts of the aggrieved persons such that, those who earlier left the party returned back, while those contemplating to forsake the party, never left.

“However, when we commenced the assignment, we realized that the problems on the ground had far outweighed our estimation of the time required to resolve the huge problems bedevilling the party. This made the initial six months dateline grossly inadequate, unrealistic, and not practicable and therefore, the need for extension of more time. Happily, for every extension, we brought in additional values with positive developments into the party.

“Having reconciled substantial stakeholders, members and groups, the committee commenced membership registration and revalidation exercise, being one of the mandates of the CECPC, to establish the party’s numerical strength for proper planning and mobilization.

“The exercise provided our new members with the opportunity to register as legitimate members of APC with equal rights, privileges, and opportunities, as well as, to give back the ownership of the party to the members, using the bottom-top approach.

“I am glad to state with all sense of fulfillment that the membership registration and revalidation exercise, recorded over 41 million members who registered with the details of their Permanent Voter Cards (PVC) and passport size photographs. This unprecedented increase in membership from the previous 11 million registered members to over 41 million registered members, provides the party with an added advantage of winning elections in Nigeria with landslide victories.

“Mr President, distinguished members, ladies and gentlemen, APC under the Caretaker Committee, made history with an unparalleled record of high-powered defections into the party. Three serving governors of Ebonyi State, His Excellency, Engr. Dave Umahi, Cross River State, His Excellency Dr. Ben Ayade, and Zamfara State, Alhaji Bello Matawalle, defected along with millions of their supporters from PDP into the APC.

“I am glad to add that the fortunes of the party were further enriched with the defection of former Speakers of the House of Representatives, former PDP national chairman, member PDP Board of Trustees, several Distinguished Senators and Honourable members of the House of Representatives and state assemblies, and several other heavyweights cutting across all the geopolitical zones of the country.”