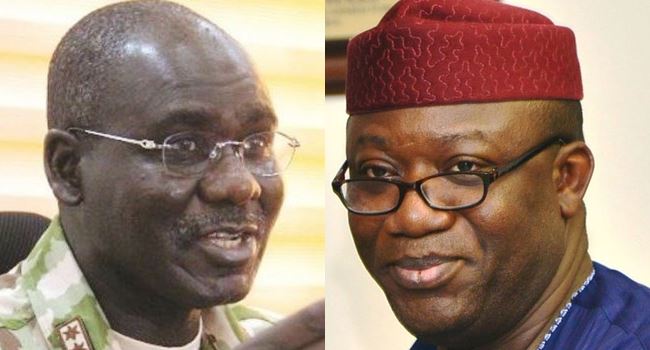 The Chief of Army Staff, Lt. Gen. Tukur Buratai, and governor of Ekiti State, Dr Kayode Fayemi, on Wednesday, crossed each other’s paths as they disagreed on the use of security vote.

The clash between the duo occurred at the headquarters of the Independent Corrupt Practices and other related offences Commission (ICPC) in Abuja.

It was gathered that the COAS questioned the use of security vote by governors, demanding that it should be subjected to audit.

But Fayemi, who is also the chairman of Nigeria Governors Forum, said the allegations that security vote was illegal and unconstitutional, was an “incorrect narrative.”

The governor said the autocratic nature of military regimes and the supreme powers vested in the leaders of such governments provided a fertile ground for the development of security vote abuse.

They both bared their minds during the second quarterly anti-corruption policy dialogue on accountability for security vote, with the theme, ‘National security: The accountability imperative,’ organised by the ICPC Anti-Corruption Academy of Nigeria.

The army chief lamented that amidst serious criticisms against security votes including alleged corruption, governors took advantage of the immunity clause in the constitution because they could not be checked until they left office.

Read also: BAUCHI: Gov Bala has nothing to show for his first 100 days in office, APC claims

“We should also take note that the security vote is not a defence vote; it is not meant to tackle insecurity. We have funding for the Ministry of Defence and the Armed Forces. We have also the police fund. It is the same for other security agencies.

“But if security vote is made constitutional and proper guidelines spelt out on how it should be utilised, I think that this issue would be laid to rest.”

However, Fayemi, who was guest speaker, said security vote was necessary because governors spent a large chunk of it on maintenance of security agencies in their domains.

The governor also demanded the devolution of powers to the federating units for them to have the control of security architecture in their domains.

He said, “In a crisis situation, resorting to bureaucratic process or procedure may worsen the situation. It requires prompt actions or measures to get it resolved. On such an occasion, the governor as the chief security officer may have to take an urgent action.  This is why the sustenance of security vote is inevitable.

“Many state governors do in fact use their security vote to provide funding to federal security agencies —whether the Nigeria Police Force, the Nigerian Army, the Department of State Services, Nigeria Security and Civil Defence Corps — operating in their states.

“The foundations of the secrecy in the allocation and abuse of security vote increased over time as a result of the long reign and dominance of the military in Nigeria’s political life.”